NetEase, publisher of the PES franchise in China says it will remove Ozil after star's social media post about Uighurs 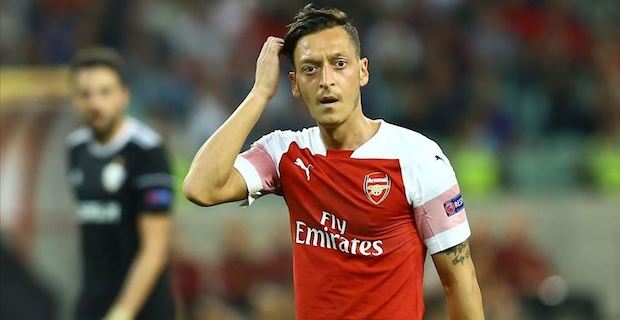 Arsenal star Mesut Ozil has been deleted from a computer football game in China as a feud between the German footballer and China intensifies on a social media post about his condemnation regarding Uighur Muslims. NetEase, the company publishes the PES franchise in China, said it will remove the British Premier League footballer from its three existing games including its most popular edition, PES 2020 Mobile.

The company claimed Ozil's comments “hurt the feelings of Chinese fans and violated the sports spirit of love and peace," and NetEase do not "understand, accept or forgive this.”

Ozil, who is a Muslim of Turkish descent, accused Muslims of staying silent Friday for what he called China’s persecution of Uighurs in Xinjiang.

On his Instagram account, the renowned Turkish footballer called Uighurs “warriors who resist persecution... Glorious believers who put up a fight alone against these who forcefully move people away from Islam.”

In China's Xinjiang Province, he said “Qurans are burned... Mosques were closed down... Islamic theological schools, Madrasahs were banned ... Religious scholars were killed one by one ... Despite all this, Muslims stay quiet.”

"If Mr. Ozil has the opportunity, we will be pleased to see him going to Xinjiang and having a look," spokesman Geng Shuang said, according to multiple reports.

U.S. Secretary of State Mike Pompeo came out Tuesday in support of Ozil in his ongoing row with China over the country's treatment of its minority Muslim Uighur population.

"China’s Communist Party propaganda outlets can censor @MesutOzil1088 and @Arsenal’s games all season long, but the truth will prevail," Pompeo said in a tweet amid Washington's ongoing trade war with China.

"The CCP can’t hide its gross #HumanRights violations perpetrated against Uighurs and other religious faiths from the world," he added, referring to the Chinese Community Party, China's ruling party.

China’s western Xinjiang region is home to around 10 million Uighurs. The Turkic Muslim group, which makes up around 45% of Xinjiang’s population, has long accused China’s authorities of cultural, religious and economic discrimination.

China is accused of carrying out repressive policies against the Uighurs and restraining their religious, commercial and cultural rights.

Up to 1 million people, or about 7% of the Muslim population in Xinjiang, have been incarcerated in an expanding network of “political re-education” camps, according to U.S. officials and UN experts.

In a report last September, Human Rights Watch accused the Chinese government of carrying out a “systematic campaign of human rights violations” against Uighur Muslims in Xinjiang.

China denies the charges against it, claiming Uighurs are being educated in "vocational training centers."

Keywords:
ChinaMesut Ozil
Your comment has been forwarded to the administrator for approval.×
Warning! Will constitute a criminal offense, illegal, threatening, offensive, insulting and swearing, derogatory, defamatory, vulgar, pornographic, indecent, personality rights, damaging or similar nature in the nature of all kinds of financial content, legal, criminal and administrative responsibility for the content of the sender member / members are belong.
Related News