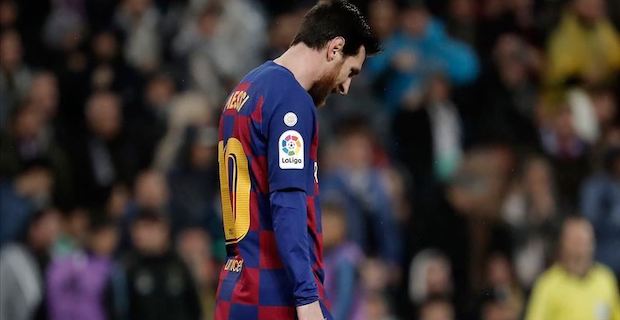 Argentine superstar Lionel Messi set his mind on ending his longtime Barcelona career as he did not join Monday's training session. Spanish daily Marca said on Monday that Messi did not have any excuse for missing the club's training so he violated a joint agreement rule between the Spanish league organizer La Liga and the AFE, Spanish union for football players.

Marca also said the 33-year-old forward may face sanctions as he can be removed from the first team squad or be fined 25% of his monthly salary.

He did not check in for Sunday's health check while all Barcelona players underwent the medical tests.

Messi is having a dispute with Barcelona as the player wants to leave the Spanish powerhouse to join England's Manchester City.

He sent a certified burofax to the Spanish side on Aug. 25 to be allowed for his departure on a free transfer.

Messi is a pure Barcelona product coming from the club's famous youth academy, La Masia. He has been playing for Barcelona since 2005.

The Argentine international renewed his deal with Barcelona in 2017, and his contract is set to conclude on June 30, 2021.

But last weekend La Liga said that Messi is obliged to pay €700 million ($828.2 million) if he terminates his contract unilaterally with Barcelona.

It was claimed that Messi agreed with Manchester City for the 2020-21 season.

"His current Barcelona contract is through 2020-21 [season] and pays him over $80 million annually," famous business magazine Forbes said last week.

Keywords:
BarcelonaLionel Messi
Your comment has been forwarded to the administrator for approval.×
Warning! Will constitute a criminal offense, illegal, threatening, offensive, insulting and swearing, derogatory, defamatory, vulgar, pornographic, indecent, personality rights, damaging or similar nature in the nature of all kinds of financial content, legal, criminal and administrative responsibility for the content of the sender member / members are belong.
Related News