Merih Demiral's season may have ended 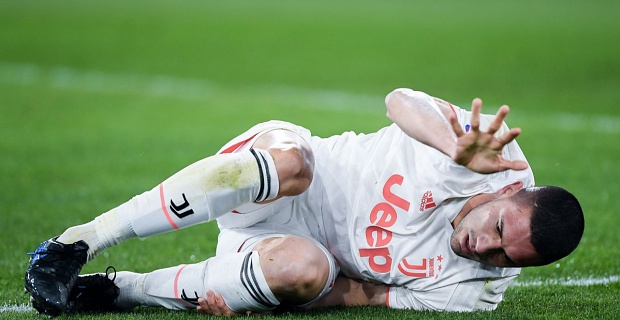 YIGIT SERTOGLU/LONDON-However, Demiral was forced to come off after a severe clash with Aleksandr Kolarov. The game ultimately ended in favour of Juventus, a penalty from Cristiano Ronaldo extended the lead to two goals. A late penalty from AS Roma's Diego Perotti did not affect the result too much, as The Old Lady secured a 2-1 win in the capital.Seen as the future captain of the Turkish national team, Merih Demiral has already managed to earn himself a place at a top prestigious club such as Juventus. Produced by Turkish football giants Fenerbahce, Demiral has already played for 6 clubs before the age of 21. Despite being the 5th choice centre back at his arrival for Juventus, ‘The Iron-man’ has managed to break into the first team. The central defender has started over Matthijs De ligt three times in the last 5 games for ‘The Old Lady’. De Ligt had signed for a whopping fee of £76.95m in the summer, making it the third most expensive club signing for the Italian giants. Demiral is currently valued at £18m.

After their 2-1 victory over AS Roma, the current Italian champions highlighted that the 21-year old has suffered from a 'Cruciate Ligament Rupture' and that his return of date is currently unknown. Juventus has also revealed that "Merih Demiral sustained a sprain to his left knee" and "injury to the anterior cruciate ligament (ACL) along with associated injury to the meniscus". It is likely that Demiral has already ended the season, as most ACL injuries take up at least 5-6 months to fully heal. Turkish fans are left in dissapointment and fear, as it is now very unlikely that Demiral will be able to play in EURO 2020.

Keywords:
FenerbahceRonaldoJuventusDemiralAS RomaPerotti
Your comment has been forwarded to the administrator for approval.×
Warning! Will constitute a criminal offense, illegal, threatening, offensive, insulting and swearing, derogatory, defamatory, vulgar, pornographic, indecent, personality rights, damaging or similar nature in the nature of all kinds of financial content, legal, criminal and administrative responsibility for the content of the sender member / members are belong.

Its a shame, he was just starting to get play time