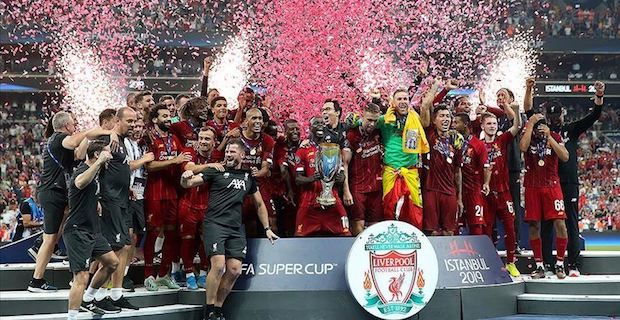 But Liverpool picked up their tempo as winger Sadio Mane equalized three minutes into the second half.

With the score at 1-1 at the end of regular time, the match went into extra time.

Mane found the net again to put Liverpool in front 2-1 in the 95th minute.

In the 101st minute, Chelsea midfielder Jorginho pushed a penalty kick in for his team, and the game went to penalties.

Liverpool captain Jordan Henderson received the cup on the podium from Ali Turganbekov, a Kazakh boy born without legs.

French referee Stephanie Frappart officiated the game and became the first female referee ever to take charge of the major men's European match at the UEFA Super Cup clash.

After the game, Liverpool wrote ''We love Istanbul'' on Twitter, as the Reds won their second European Cup in Istanbul with this victory.

At the end of the first half, Milan dominated the match 3-0. In the second half, Liverpool scored three goals in an impressive comeback, tying the game.

The Reds lifted the Champions League trophy after beating Milan 3-2 on penalties in another historic night for the English club.

Keywords:
LiverpoolChelseaUEFA Super Cup
Your comment has been forwarded to the administrator for approval.×
Warning! Will constitute a criminal offense, illegal, threatening, offensive, insulting and swearing, derogatory, defamatory, vulgar, pornographic, indecent, personality rights, damaging or similar nature in the nature of all kinds of financial content, legal, criminal and administrative responsibility for the content of the sender member / members are belong.
Related News