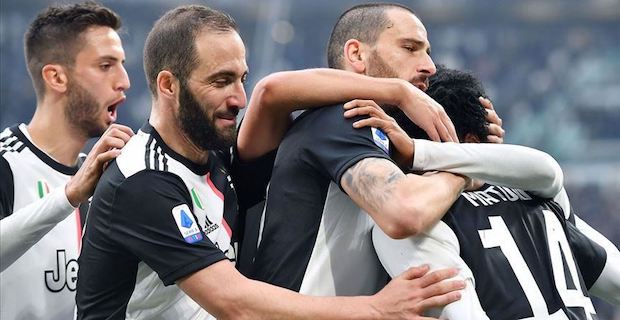 Lazio ended title rivals Inter Milan’s unbeaten run on Sunday night to move to the second spot in Italy’s Serie A. Lazio came from behind to secure a 2-1 victory that puts them just one point behind leaders Juventus. The result ended Inter's 16-game undefeated run and knocked them off the top spot.  Juventus replaced Inter at the top of the table on Sunday, Turin club beat 10-man Brescia 2-0, while their goals came from Paulo Dybala and Juan Cuadrado. Meanwhile, Brescia French forward Florian Aye was dismissed with a red card at Allianz Stadium. Playing at Stadio Olimpico, Inter Milan lost to the runners-up Lazio with a 2-1 score as the Nerazzurri slipped to the third spot of the table.

On Saturday's game, Atalanta boosted their points to 45 after they defeated Roma 2-1, staying in fourth place.

Reigning champions Juventus now lead the pack with 57 points, followed by Lazio with 56 and Inter with 54.

The 24th week of Serie A will be ended with Milan - Torino match at San Siro Stadium on Monday.

Week 24 results in Serie A are as follows:

Keywords:
JuventusLazio
Your comment has been forwarded to the administrator for approval.×
Warning! Will constitute a criminal offense, illegal, threatening, offensive, insulting and swearing, derogatory, defamatory, vulgar, pornographic, indecent, personality rights, damaging or similar nature in the nature of all kinds of financial content, legal, criminal and administrative responsibility for the content of the sender member / members are belong.
Related News