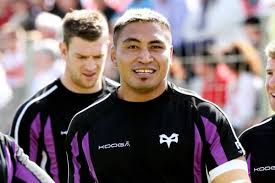 The sporting world has paid tribute to former New Zealand rugby union player Jerry Collins after he was killed in a car crash in France on Friday morning.Collins, capped 48 times for the All Blacks, was reported to have collided with a bus on the A9 in the Herault region. His wife, Alana Madill, was also killed in the accident, and his three-year-old daughter Ayla has been taken to a hospital in Monpellier in a critical condition.

The All Blacks’ official Twitter account expressed their shock and sorrow at the news, with Collins fondly remembered as one of the most intimidating men to pull on the All Blacks jersey during his international career from 2001 until 2008.Former All Blacks captain Sean Fitzpatrick admitted that Collins' death was "very tragic news" and revealed that that player he managed with the New Zealand Under-21s was "as tough as nails on the field and as loving and caring off the field.(The Independent)