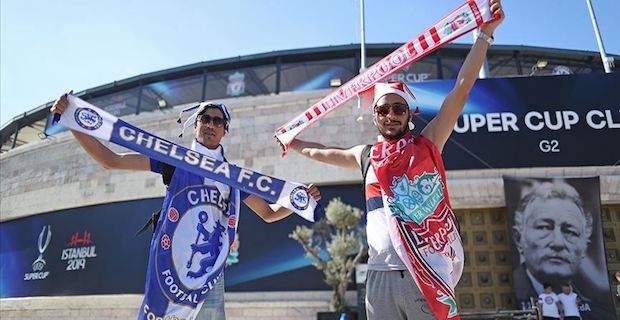 As the clock ticks down to the 2019 UEFA Super Cup between English clubs Liverpool and Chelsea at Istanbul's Besiktas Park on Wednesday night, the city is already legendary for hosting the 2005 Champions League final, one of the most unforgettable finals in European football history.

''It's wonderful to be back in this beautiful and famous football city for tonight's #SuperCup,'' tweeted UEFA, European football's governing body, on Wednesday.

''Besiktas Park is set to give the world a message of togetherness through football, next to the Bosphorus, where two continents meet," added UEFA.

"As it prepares to host the 2019 UEFA Super Cup on 14 August, the city of Istanbul is ready to offer an experience filled with passion, entertainment, culture and architecture, emulating the festival atmosphere enjoyed by everyone who was there for that memorable Champions League final in 2005.''

At the end of the match's first half, Milan dominated the match, 3-0. In the second half, Liverpool scored three goals in an impressive comeback, tying the game.

Neither team were able to score in extra time, and the game went to penalties. Liverpool lifted the Champions League trophy after beating Milan 3-2 on penalties, in a historic night for the English club.

Keywords:
BesiktasUEFA Champions LeagueLiverpoolChelsea
Your comment has been forwarded to the administrator for approval.×
Warning! Will constitute a criminal offense, illegal, threatening, offensive, insulting and swearing, derogatory, defamatory, vulgar, pornographic, indecent, personality rights, damaging or similar nature in the nature of all kinds of financial content, legal, criminal and administrative responsibility for the content of the sender member / members are belong.
Related News