The Yellow Canaries come away with a 2-0 from Antep, starting the second half of the season with a win. Goals from Max Kruse and Vedat Muriqi brought home the 3 points for Ersun Yanals’ team. Fenerbahce has now won 3 of their 3 previous games, their last defeat being to Super Lig leaders Sivasspor in December. 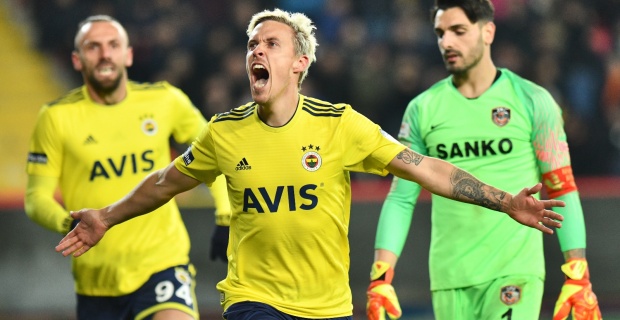 YIGIT SERTOGLU / LONDON - The first half was slow, with a lot of stoppage due to injuries and ended with no goals. The second half was very fast paced as there were a total of four goals, two being called off due to VAR in the match and the other two resulting in Fenerbahce's victory. Garry Rodrigues's shot was rebounded off the post to Muriqi who tapped it into an empy net in the 46th minute, but Muriqi’s goal was disallowed due to him being offside. The Istanbul side found the opening goal with Max Kruse in the 50th minute, assisted by Muriqi. A timed header from the centre of the box to the bottom left corner of the goal found Kruse’s third goal in the Super Lig this season. Muriqi also managed to assist for the third time this season.

After multiple crucial chances on goal, Gaziantep found an equalizer on the 87th minute but the goal was disallowed due to a previous foul on Ozan Tufan by Olarenwaju Kayode. The score-line was finalised when Kosovan striker Muriqi netted his 11th goal in the Super Lig this season. Assisted by Ozan Tufan, the 25-year old found a right footed shot from the right side of the box defeating ex-Besiktas keeper Gunay Guvenc and ending Gaziantep FK’s hopes on finding an equalizer.

Minutes before the final whistle, Muriqi was shown a second yellow card for time wasting and sent off with a red card. The prolific striker was supposed to miss Fener’s next home game against Basaksehir due to receiving his 4th yellow card this season. However, receiving a red card allows him to miss the Turkish Cup game against Kayserispor in the week, and makes him eligible to play against Basaksehir (2nd).

Fenerbahce are now 3rd in the Super Lig with 34 points, 3 points behind league leaders Sivasspor who also have a game in hand.

Keywords:
FenerbahceBesiktasTurkish CupMax KruseGaziantep FKMuriqiKruseVedat MuriqiGunay GuvencSivassporSuper LigOzan TufanKayserisporYellow CanariesBasaksehir
Your comment has been forwarded to the administrator for approval.×
Warning! Will constitute a criminal offense, illegal, threatening, offensive, insulting and swearing, derogatory, defamatory, vulgar, pornographic, indecent, personality rights, damaging or similar nature in the nature of all kinds of financial content, legal, criminal and administrative responsibility for the content of the sender member / members are belong.
Related News