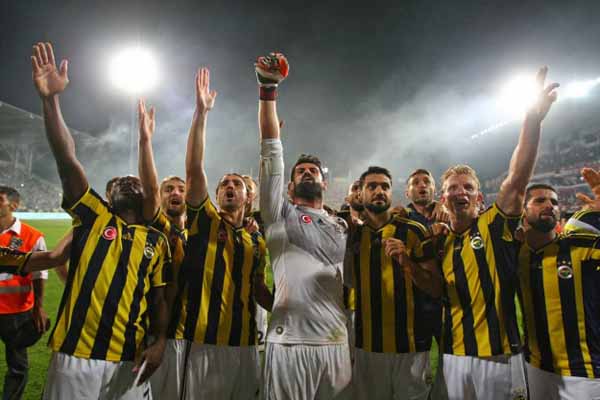 In the 35th minute Galatasaray were close to take the lead after Turkish winger Olcan Adin smashed the ball outside the box, with the ball shaving the post. In 41’, Fenerbahce's Turkish defensive midfielder Mehmet Topal's close range header after a corner kick was saved by Uruguayan goalkeeper Fernando Muslera. Fenerbahce increased the pressure towards the end of the first half, but failed to find an opener. Before the second half's kick off, objects including plastic bottles were thrown from Galatasaray stands. Galatasaray goalkeeper Muslera ran towards the opposite goal to calm down fans. In the 51th minute of the play Fenerbahce's Turkish left-back Caner Erkin made a vicious strike from long range but missed the target. Meanwhile several fans in Fenerbahce stands threw firecrackers to the pitch targeting Muslera. In the 78th minute Fenerbahce's Turkish defender Bekir Irtegun hit the ball on loose without trapping it outside the box after a corner kick, only to be deflected by Muslera to corner.

In the remaining time none of the sides could effect change in the score, so the regular time ended in a goalless draw.

After the final whistle, a poor penalty performance saw Fenerbahce wing the clash against Galatasaray 3-2.

The western province of Manisa is home to the Soma district, which witnessed the deadliest mining disaster in Turkish history in May causing the deaths of 301 people. Profit from ticket sales for the match will go to charity for the victims’ families.