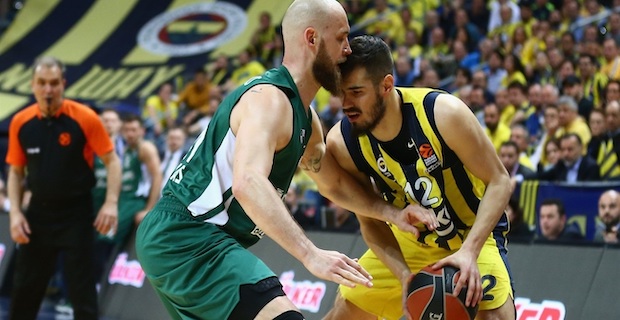 Turkey's Istanbul-based basketball giants Fenerbahce Beko upset Zalgiris Kaunas 66-57, claiming a 2-1 lead against their Lithuanian opponents in an away game in Turkish Airlines EuroLeague quarterfinal playoffs late Tuesday. Fenerbahce Beko's Serbian guard Marko Guduric scored 17 points in the game three held at Zalgirio Arena as their Czech star Jan Vesely produced 10 points. Home team Zalgiris Kaunas' American guard Nate Wolters was his team's top scorer, racking up 15 points. Following the Tuesday's victory, Fenerbahce Beko has taken the home court advantage. The next game of the series will be played in Kaunas on Thursday. If Fenerbahce Beko wins the Thursday's game, they will book a berth for the Final Four.  In case of a 2-2 tie, the last game will be played in Istanbul.

Spain's Real Madrid are the first to qualify for 2019 Final Four.

Beating Panathinaikos OPAP 89-82 in the game three in Athens on Tuesday, Real Madrid swept their opponents by 3-0 in the last eight.

Real may face either Kirolbet Baskonia Vitoria-Gasteiz or CSKA Moscow in the Final Four.

The quarterfinal playoff series between Baskonia and CSKA Moscow is now 1-1.

The winners of the playoffs will advance to the Final Four to be played on May 17-19 at Fernando Buesa Arena in the Spanish city of Vitoria-Gasteiz in single-elimination matchups.

Keywords:
Fenerbahce BekoZalgiris
Your comment has been forwarded to the administrator for approval.×
Warning! Will constitute a criminal offense, illegal, threatening, offensive, insulting and swearing, derogatory, defamatory, vulgar, pornographic, indecent, personality rights, damaging or similar nature in the nature of all kinds of financial content, legal, criminal and administrative responsibility for the content of the sender member / members are belong.
Related News