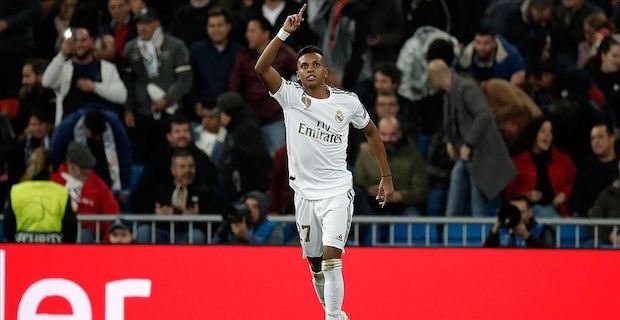 Real Madrid's Brazilian winger Rodrygo has been named player of the week in the UEFA Champions League on Friday following his sensational performance over Galatasaray. Rodrygo passed other nominees Achraf Hakimi from Borussia Dortmund, Paris Saint-Germain's Keylor Navas and Son Heung-min from Tottenham in online voting by the uefa.com users to be awarded as the player of the Week 4.

The 18-year-old player featured a standout form with scoring a hat-trick and making an assist against Galatasaray in Wednesday's Group A match while Real Madrid hammered the Lions 6-0 at Santiago Bernabeu.

Having scored six goals in eight matches in all competitions this season, the 18-year-old player also became one of the youngest hat-trick scorers in Champions League campaign.

Real Madrid's legendary striker Raul Gonzalez is still the youngest hat-trick scorer after he scored three goals for the La Liga giants over Ferencvaros in October's 1995.

Raul was only 18 years and 114 days old when he made a history in Champions League, meanwhile Rodrygo was born on January 9, 2001.

Keywords:
Real MadridBrazilian Wunderkind Rodrygo
Your comment has been forwarded to the administrator for approval.×
Warning! Will constitute a criminal offense, illegal, threatening, offensive, insulting and swearing, derogatory, defamatory, vulgar, pornographic, indecent, personality rights, damaging or similar nature in the nature of all kinds of financial content, legal, criminal and administrative responsibility for the content of the sender member / members are belong.
Related News