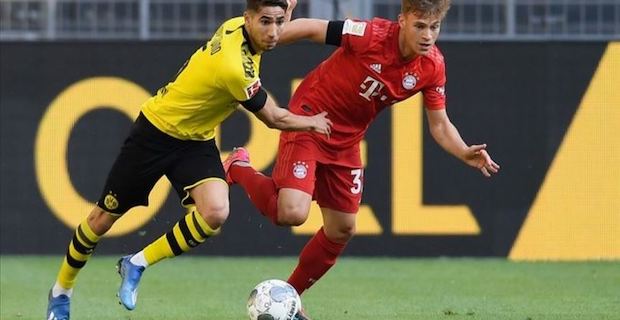 AVRUPA - Bayern Munich’s hopes for an eight successive Bundesliga title received a major boost as they beat challengers Borussia Dortmund 1-0 in a top-of-the-table clash on Tuesday. Midfielder Joshua Kimmich’s sensational chipped goal minutes before halftime ensured the reigning champions returned from Dortmund’s Signal Iduna Park with a seven-point lead at the top. The seventh straight win took Bayern Munich’s tally up to 64 points at the end of Week 28, with Dortmund in second place with 57 points. Meanwhile, Wolfsburg earned a shock 4-1 away win against Bayer Leverkusen. Defender Marin Pongracic grabbed a brace, along with a strike each from midfielders Maximilian Arnold and Renato Steffen, as Wolfsburg hammered fifth-placed Leverkusen at the BayArena. All Bundesliga matches were played without fans as part of safety measures amid the coronavirus pandemic.

Keywords:
Bayern MunichBundesliga
Your comment has been forwarded to the administrator for approval.×
Warning! Will constitute a criminal offense, illegal, threatening, offensive, insulting and swearing, derogatory, defamatory, vulgar, pornographic, indecent, personality rights, damaging or similar nature in the nature of all kinds of financial content, legal, criminal and administrative responsibility for the content of the sender member / members are belong.
Related News