Arsenal Star Reportedly Looking Likely to Move Away to Turkey 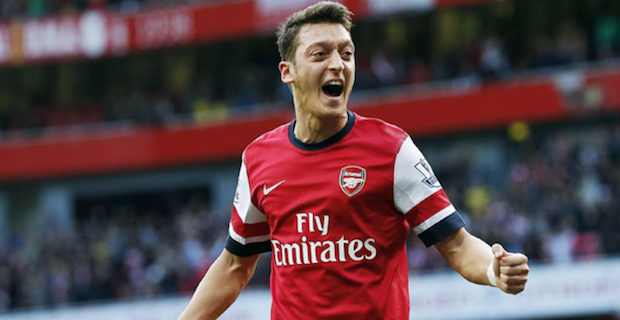 With friction reportedly developing between manager Unai Emery and midfielder Mesut Özil at Arsenal, Süper Lig side Fenerbahçe has been named by one publication as the former Germany international’s next destination.

In the penultimate Premier League game before the international break, Özil missed Arsenal’s 3-1 victory over West Ham United with the time-old excuse of undefined ‘illness’, heightening speculation that the German midfielder is not long for the club.

Özil only signed a new £350,000 a week contract back in February last season, when the Gunners were under the stewardship of Arsene Wenger. The contract supposedly extends his tenure in North London under the end of the 2020/21 season.

However, with former PSG boss Unai Emery now at the helm, and tensions supposedly rising between the two, Fenerbahce seems increasingly likely, according to Turkish publication Aspor, to be Özil's next club.

Fenerbahçe has emerged as a possible destination for the tiled German star in the past. Around 18 months ago, The Telegraph highlighted to possibility of the Turkish club being a likely place for Özil - who has Turkish heritage - to seek when contract talks with the North London club were up in the air.

Özil moved from Real Madrid to the three-time Premier League champions Arsenal in 2013, but has experienced a tumultuous career and relationship between him and the supporters who have often levelled criticism at his sporadic successful and perceived lack of enthusiasm.

The 29-year-old has made almost 200 appearances for Arsenal, scoring 37 goals and contributing 71 assists. Özil is a three-time FA Cup champion, and also helped Arsenal collect the Community Shield at the beginning of the 2015/16 season.

Keywords:
FenerbahceArsenalMesut OzilPremier League
Your comment has been forwarded to the administrator for approval.×
Warning! Will constitute a criminal offense, illegal, threatening, offensive, insulting and swearing, derogatory, defamatory, vulgar, pornographic, indecent, personality rights, damaging or similar nature in the nature of all kinds of financial content, legal, criminal and administrative responsibility for the content of the sender member / members are belong.
Related News