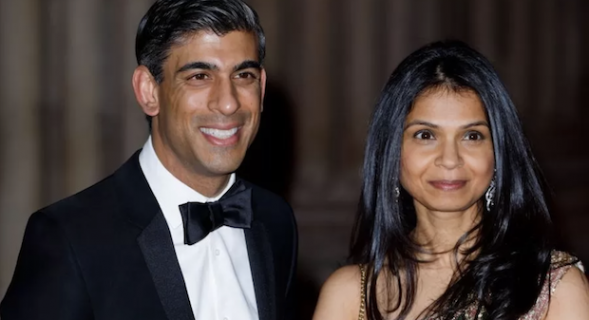 His wife Akshata Murty is the daughter of Indian billionaire Narayana Murthy, one of the country's best known businessmen who has been dubbed the Bill Gates of India.An heiress to a fortune worth billions, Ms Murty came under the spotlight when it emerged earlier this year that she held non-domiciled status, meaning she did not have to pay any tax on her earnings from outside the UK. She later agreed to pay UK taxes on her worldwide income.Despite her family's immense wealth, Ms Murty came from more humble beginnings.In a letter to his daughter, published in a 2013 compilation, her father recalled how he heard the news of her birth in Hubli in April 1980 from a colleague because the family could not afford a telephone."Your mother and I were young then and struggling to find our feet in our careers," he wrote.When she was just a few months old, Ms Murty was sent to live with her paternal grandparents as her mother, Sudha Murty, and her father advanced their careers in Mumbai.A year later, Mr Murthy co-founded Infosys, an IT services company which would make him one of India's richest individuals.Smearing my wife to get at me is awful, says Sunak. Ms Murty's high-achieving parents also instilled a focus on education and hard work on their two children. Mr Murthy said there was no TV in their home to make time for "things like studying, reading, discussions and meeting friends".She went on to study economics and French at the private liberal Claremont McKenna College in California. Ms Murty then earned a diploma at a fashion college before working at Deloitte and Unilever and studying for an MBA at Stanford University.It was at university that she met Mr Sunak. The couple married in 2009 and went on to have two daughters.The 42-year-old began her career in finance in California before starting her own fashion label, Akshata Designs, which launched its first collection in 2011. She told Vogue India she worked with artists in remote Indian villages to create her designs, which were about "authenticity, craftsmanship and protecting a rich heritage".However, the Guardian reported that the business collapsed within three years.Ms Murty was seen alongside her husband's parents during the summer Conservative leadership raceOne of her main business interests is the London-based offshoot of Catamaran Ventures, which was founded by Ms Murty and Mr Sunak in 2013 and invests in start-ups.On Companies House, Ms Murty is also listed as a director of Digme Fitness, a pay-as-you-go gym chain.The company was put into administration in February this year after revenues dropped during the Covid-19 pandemic, despite receiving furlough funds.Ms Murty's LinkedIn profile also lists her as a director of New & Lingwood, which sells high-end menswear.She owns a 0.9% stake in Infosys, according to the company's latest annual report, which is estimated to be worth about £700m.Her shares in the company became a subject of controversy following Russia's invasion of Ukraine, when the firm was under pressure to halt its operations in Moscow. In April, the BBC was told Infosys was closing its office in Russia.More broadly, the couple's huge wealth has led some to question whether Mr Sunak is out of touch with ordinary people, particularly during a cost-of-living crisis.In the past, some prime ministerial spouses, including Theresa May's husband Philip May have kept a low profile.Others, like human rights lawyer Cherie Blair, who continued her high-flying job after her husband Tony entered No 10, attracted much more attention. Mrs Blair often made the headlines in her own right for her charity work and book contracts.So far, Ms Murty does not seem to have sought the media spotlight but has instead been thrust into it by recent controversies.However, her husband's ascent to the top job in British politics means the interest in Ms Murty will only become more pronounced.BBC NEWS-By Becky MortonBBC political reporter

Keywords:
Rishi Sunaks WifeRishi SunakAkshata Murty
Your comment has been forwarded to the administrator for approval.×
Warning! Will constitute a criminal offense, illegal, threatening, offensive, insulting and swearing, derogatory, defamatory, vulgar, pornographic, indecent, personality rights, damaging or similar nature in the nature of all kinds of financial content, legal, criminal and administrative responsibility for the content of the sender member / members are belong.
Related News