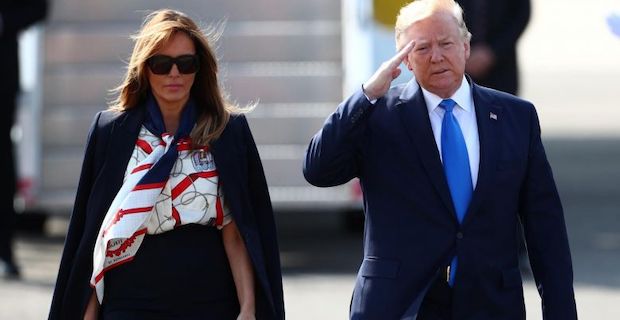 Air Force One landed at Stansted Airport at around 09:00 BST (04:00 ET). Mr Trump will meet members of the Royal Family, and is expected to discuss climate change and Chinese technology firm Huawei during talks with outgoing Prime Minister Theresa May. Minutes before touching down, Mr Trump criticised Mayor of London Sadiq Khan, with whom he has clashed in the past.  He tweeted that Mr Khan - who had earlier said the UK should "not roll out the red carpet" for Mr Trump - was a "stone cold loser", but the president added he was looking forward to his visit. Protests are planned across the UK during the visit, including in London, Manchester, Belfast, and Birmingham.

Mr Trump was greeted by US Ambassador to the UK Woody Johnson and Foreign Secretary Jeremy Hunt, who said Mr Trump mentioned to him "some of his very strong views about the Mayor of London" which he had also tweeted.

Mr Trump's tweet accused Mr Khan of doing a "terrible job" as mayor, adding: "[He] has been foolishly "nasty" to the visiting President of the United States, by far the most important ally of the United Kingdom. He is a stone cold loser who should focus on crime in London, not me."

A spokesman for Mr Khan said "childish insults" should be beneath the US President, adding: "Sadiq is representing the progressive values of London and our country, warning that Donald Trump is the most egregious example of a growing far-right threat around the globe." 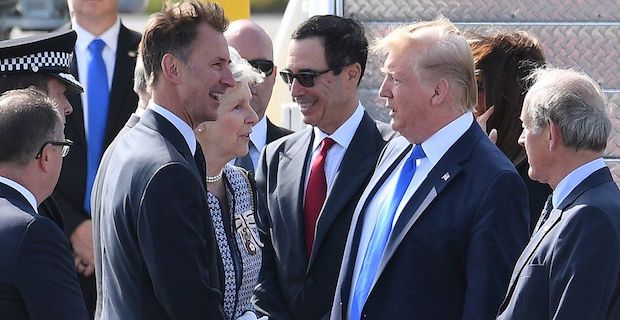 Although Mr Trump has spoken of his admiration for Mrs May, there is expected to be differences of opinion during their talks, which begin on Tuesday.

The prime minister will raise the issue of climate change, with a government spokesman again saying on Monday the UK was "disappointed by the US decision to withdraw from the Paris Agreement in 2017".

The two leaders are also expected to discuss Huawei. The US has blacklisted the Chinese firm for security reasons, while the UK may allow it to supply "non-core" components for its 5G network.

Before the visit, President Trump told the Sun newspaper that he was backing Conservative Party leadership contender Boris Johnson to be the next UK prime minister.

He also told the Sunday Times that Brexit Party leader Nigel Farage - an arch critic of Mrs May - should be involved in the government's negotiations to leave the EU. 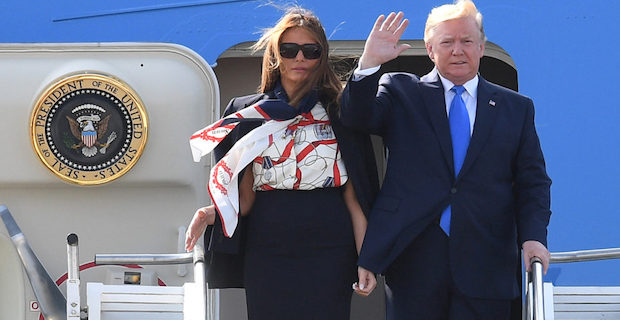 On Monday, the president will be given a tour of Westminster Abbey and will also meet Prince Charles and the Duchess of Cornwall for tea at Clarence House.

In the evening, the Queen will host a state banquet at Buckingham Palace for the president and the First Lady Melania Trump.

The Queen will be joined by the Duke and Duchess of Cambridge. The Duchess of Sussex will not attend following the birth of her son Archie, who is less than a month old.

On Sunday, Mr Trump denied calling the duchess "nasty", despite him using the word on tape.

At Buckingham Palace, both the president and the Queen are expected to make a speech to guests, which will include prominent Americans living in Britain.

President Trump will be staying at the US ambassador's residence Winfield House, in central London's Regent's Park.

Mr Trump's daughter, Ivanka, arrived in the UK before the president. On Sunday, she posted a picture from outside the Victoria and Albert Museum in west London where she had visited the Christian Dior exhibition.

Keywords:
Donald TrumpUS President Donald TrumpSadiq Khan
Your comment has been forwarded to the administrator for approval.×
Warning! Will constitute a criminal offense, illegal, threatening, offensive, insulting and swearing, derogatory, defamatory, vulgar, pornographic, indecent, personality rights, damaging or similar nature in the nature of all kinds of financial content, legal, criminal and administrative responsibility for the content of the sender member / members are belong.
Related News