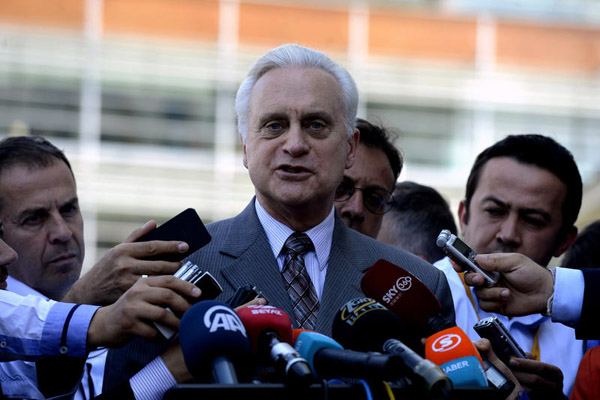 It has been reported that the United States ambassador to Turkey Francis Ricciardone said, ‘now you will see the fall of an empire,’ referring to the recent scandal that has seen the general manager of Turkey’s Halkbank, Suleyman Aslan, arrested. According to a report in Turkey’s Star newspaper, the U.S. ambassador is reported to have said these words at a dinner meeting with a group of European diplomats on December 17. The United States and Israel have been accused by some commentators of being behind the recent Turkish corruption case, which has primarily targeted Halkbank for supposedly breaching international sanctions against Iran. U.S.-based pro-Israeli lobby group AIPAC recently put pressure on the U.S. Congress to act against Halkbank for giving Iran access to world oil markets, resulting in 47 neo-con congressmen writing letters to the U.S. Foreign Ministry and Treasury calling for Halkbank to be punished.

At the same time, a document dating back from 2009 has been revealed by Wikileaks, detailing a meet that took place between U.S. Treasury intelligence agent David Cohen and Halkbank representatives, in which Halkbank was warned over its dealings with Iran. Cohen reportedly told Halkbank not to loosen the flow of money to Iran as sanctions were still ongoing.

Turkish main opposition Republican People’s Party (CHP) leader Kemal Kilicdaroglu was also accompanied by CHP deputy Faruk Logoglu in a visit to the U.S. embassy in Ankara, where they met with ambassador Ricciardone. As much as they claim that the meeting was pre-planned, the coincidence has led many to believe that the U.S. and the Turkish opposition are cooperating to bring down the AK Party ruled government.

These events have unfolded following Turkey’s Economy Minister Zafer Caglayan’s announcement that Turkey was planning to renew its gold trade with Iran following an agreement between Iran and western nations at last month’s P5+1 meeting, in which Iran agreed to curb its nuclear program in return for the loosening of international sanctions. Halkbank was playing a key role in this revived gold trade. Zafer Caglayan’s son was also arrested as part of an anti-graft operation.

Francis Ricciardone denied that any foreign forces were involved in the corruption case, insisting that it is purely a domestic affair in Turkey.