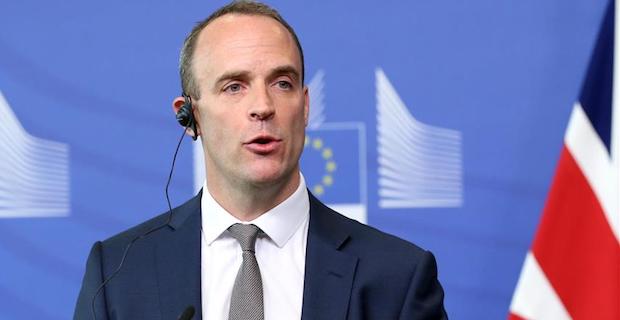 The U.K. has been “too reasonable” in Brexit negotiations with the EU, Brexit Secretary Dominic Raab said, accusing the bloc of being “one-sided” in the talks.

Speaking at the Conservative Party autumn conference in Birmingham, Raab accused the EU of not matching Britain's efforts.

"We want the EU to match our ambition and pragmatism but that wasn’t on display in Salzburg,” Raab said, referring to an informal EU summit held in the Austrian city, where British Prime Minister Theresa May’s Chequers plan was described as “unworkable.”

“Our prime minister has been constructive and respectful. In return we heard jibes from senior leaders. And we saw a starkly one-sided approach to negotiation, where the EU’s theological approach allows no room for serious compromise,” Raab said.

“And yet we are expected to cast aside the territorial integrity of our own country. If the EU wants a deal, they need to get serious. And they need to do it now,” he added.

No deal not 'unthinkable'

Raab said no deal is not “unthinkable,” despite some people’s claims.

“What is unthinkable is that this government, or any British government, could be bullied by the threat of some kind of economic embargo into signing a one-sided deal against our country’s interests.”

Admitting that “there are risks and potential short-term disruption,” in case of a no-deal scenario, Raab said: “But we’ll deal with any problems that might arise in the event of no deal in a calm and sensible manner.”

No go on second referendum

The Brexit secretary also underlined that a second referendum on the country’s exit from the EU would not be democratic, as the calls for such a referendum have started to pour in more strongly since May’s Chequers deal was snubbed by EU leaders.

“I’ll tell you what’s not democracy. The efforts of a small, but influential group of senior politicians and establishment figures to overturn the result of the referendum.

“They want to stop us leaving.

“You can just picture them, sitting in an expensive advertising agency, discussing how to claim that black is white.

“Our research shows that the public doesn’t like the idea of a second referendum. That’s all right – we’ll rebrand it a people’s vote. They might buy that.”

Raab said: “But there’s a real sense that Leave won fair and square.”

Accusing those who want a second referendum of trying to sow fear, Raab also said such a referendum would be “divisive”.

U.K. and EU negotiators will meet in mid-October and try to ink a deal on sticky issues such as the future of the border between Northern Ireland and Ireland, citizens’ rights, and future trade relations between the sides.

An emergency Brexit summit will be called if the parties progress on a possible deal, according to EU leaders.

Keywords:
EUBrexitUK BrexitDominic Raab
Your comment has been forwarded to the administrator for approval.×
Warning! Will constitute a criminal offense, illegal, threatening, offensive, insulting and swearing, derogatory, defamatory, vulgar, pornographic, indecent, personality rights, damaging or similar nature in the nature of all kinds of financial content, legal, criminal and administrative responsibility for the content of the sender member / members are belong.
Related News