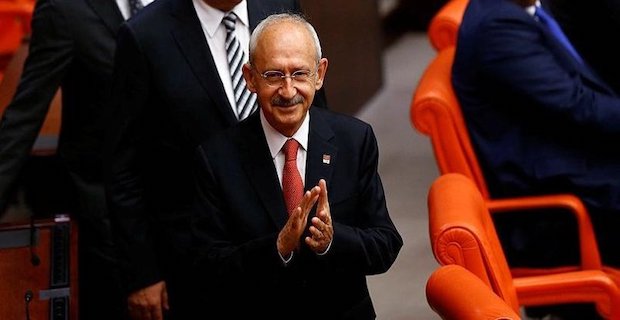 Turkey's main opposition Republican People's Party (CHP) leader on Tuesday filed a legal complaint against the suspects who attacked him during a martyr funeral. The advocate of Kemal Kilicdaroglu submitted the complaint petition to the prosecution. After Sunday’s attack in the Cubuk district of the capital Ankara, nine suspects, including a woman, have been taken into custody for allegedly throwing stones at the official car of Kilicdaroglu during the funeral. Eight of the suspects were later released, while the detention period of Osman S., who allegedly punched Kilicdaroglu, was prolonged.

Later on Tuesday, Osman S. was released under judicial control.

Meanwhile, the CHP requested a parliamentary inquiry to clarify the incident in all aspects, to investigate the security and intelligence vulnerabilities and to hold those responsible accountable.

The inquiry into the incident read that a “lynch attempt” during the funeral of the martyred soldier was a "premeditated attack".

Keywords:
CHPKemal KılıçdaroğluRepublican Peoples Party
Your comment has been forwarded to the administrator for approval.×
Warning! Will constitute a criminal offense, illegal, threatening, offensive, insulting and swearing, derogatory, defamatory, vulgar, pornographic, indecent, personality rights, damaging or similar nature in the nature of all kinds of financial content, legal, criminal and administrative responsibility for the content of the sender member / members are belong.
Related News