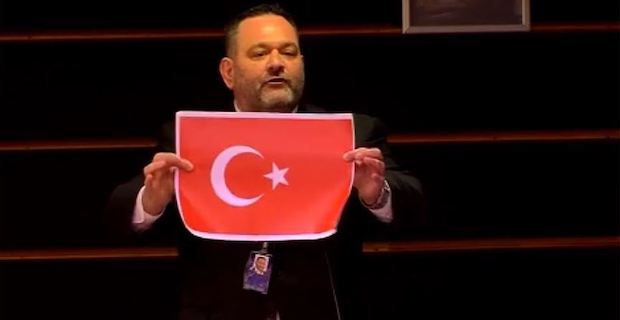 A Greek parliamentarian who ripped apart a Turkish flag on the floor of the European Parliament will face a criminal investigation in Turkey, Turkish prosecutors announced Friday.

Prosecutors in the capital Ankara said Ioannis Lagos, a far-right Greek MEP, will be investigated for insulting the sovereignty of the state under Article 300 of the Turkish Criminal Code.

During an EP debate Wednesday over a large number of migrants on Greek islands, Lagos blamed Turkey for the “stream of migrants coming into” his country and “getting away with whatever it likes.”

He then tore a Turkish flag made of paper into pieces and balled up the scraps, throwing them to the floor.

Lagos is one of the most prominent figures of the far-right racist Golden Dawn party.

In 2019 he was found guilty of attacking an Athens community center which was hosting asylum-seekers.

Lagos’ action has been condemned by Turkey’s foreign minister and the ruling party as well as the Greek Foreign Ministry.

Last October, Italian MEP Angelo Ciocca was suspended from activities in the EP for several days for throwing a box of Turkish delight during a debate over Turkey’s anti-terrorist Operation Peace Spring in northern Syria.

Keywords:
Turkish FlagIoannis LagosGreek MEP
Your comment has been forwarded to the administrator for approval.×
Warning! Will constitute a criminal offense, illegal, threatening, offensive, insulting and swearing, derogatory, defamatory, vulgar, pornographic, indecent, personality rights, damaging or similar nature in the nature of all kinds of financial content, legal, criminal and administrative responsibility for the content of the sender member / members are belong.
Related News