As more Syrian refugees board rickety boats on the Turkish coast, the so called Islamic State 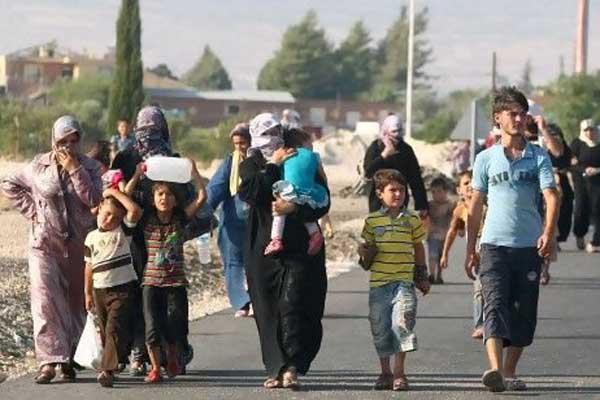 As more Syrian refugees board rickety boats on the Turkish coast, the so-called ‘Islamic State’ is cranking up its propaganda campaign. The refugee crisis is also becoming a crisis for ISIS, as Syrians reject the group's claim that the so-called caliphate offers a safe haven, and the refugees instead opt for the dangerous journey to Europe. In recent weeks, ISIS has put out almost a dozen videos with messages that denounce the refugees, threaten them with the horrors of living among "unbelievers" and plead with them to join the caliphate. "The idea that they are not heading to 'ISIS land' is a slap in the face," says Alberto Fernandez, who ran the State Department's counterterrorism communications unit before recently joining the Middle East Media Research Institute, or MEMRI.  "They are leaving because their relatives were killed by Assad," he says of the refugees. "That's the ISIS demographic, but the people brutalized by Assad are not turning to ISIS." This is perhaps hardly surprising given that ISIS/Da’Esh are hardly the most liberal of regimes!

This reality has apparently ‘rattled’ the group, according to Fernandez. The media coverage of the refugee exodus is impossible to ignore even in areas under ISIS control, he notes. "You can't avoid heart-wrenching pictures of people ‘going West’," he adds. It is an affront to the basic ISIS ideology, he says, for a militant group that believes it is a sin for Muslims to live in inclusive Western societies. For these ideological militants, "real Muslims" must become part of ISIS, and "if you are trapped in the West, go kill someone," says Fernandez, describing the basic message of the Islamic State. The rejection [of IS] by so many Syrians has prompted ISIS to try to counter the narrative.

The majority of Sunni Muslims who oppose President Bashar Assad's regime also reject the ISIS hard-line ideology. No amount of propaganda videos can counter the image of desperate Syrian families on the move with their children, willing to sacrifice everything on the gamble for a better future in Europe. "If you look at the people who have left Syria in the past few years, it's the best people," says Fernandez. These are people who aspire to a middle-class life." More than 4 million Syrians have fled the country since the war began in 2011 and nearly 8 million are displaced inside the country. Together, these 12 million Syrians account for more than half of the country's pre-war population of about 23 million. Turkey hosts well in excess of 1.5M Syrian people at a cost to the country so far exceeding $2.5BN, something not reported too often in the West.

It seems that not withstanding the safety afforded to the Syrian refugees within Turkey’s borders, the panacea for the majority is to leave Turkey and head for Western Europe and ideally to Germany, whilst also saying that crossing the Aegean to reach the EU has become a much less attractive an option following reports of large numbers of deaths from capsized makeshift boats. Despite the high level of unpredictability, most of the refugees -- who are predominantly Syrian -- maintain their belief that a journey to Germany is somehow possible. Their biggest concern is the future of their children, since most of them are not receiving an education in Turkey. Furthermore, employment opportunities are apparently scant even for the most highly educated and low wages are another major issue. In short, and for the majority, ‘Going West’ is their only hope.

Quite apart from the urgent need to carry out far more surgical strikes upon IS/ISIS/Da’Esh targets, where so ever they may be and with the use of weapons of absolute destruction including the deployment of napalm and other such agents, the international community need to be working more closely together in order to create self-sustaining communities in Islamic countries closer to the land where these people hail from. Many will have abandoned hope of returning to their ancestral lands, but the hope is that one day they may be able so to do. In the meantime, there is surely a need to provide sustainable interim solutions such as the ‘sustainable communities’ initiatives suggested by this column on numerous occasions during both recent weeks and consistently during the time of the current conflict.

We in the West, whilst diligently working to destroy IS with ruthless efficiency, together with utilizing covert operations to weed out and slaughter IS cells in Europe and certainly Britain, have to come up with ways to accommodate these souls and to provide not just subsistence housing, but real communities including farming, building, education and so forth. Renewable energy is but one way of providing the building blocks for such communities whilst rich countries like Saudi Arabia, Oman, Qatar and such-like should be ‘encouraged’ to do their bit by taking in their ‘share of the quota’ as promulgated by the UN and the EU.

All the time that people are committed to the notion that the west is paved with gold and flows with ‘milk and honey’ the ‘swarm’ will continue to head this way and many tears shall ensue! Furthermore and in conclusion, no one is going to convince this writer that the herds of young, fit able bodied young men that we are seeing surging through Eastern Europe are anything other than opportunists and it is highly likely there are IS cells amongst them. To borrow a mantra from social media recently: “If things are so bad for your woman and children back home, go back and fight to protect them!”