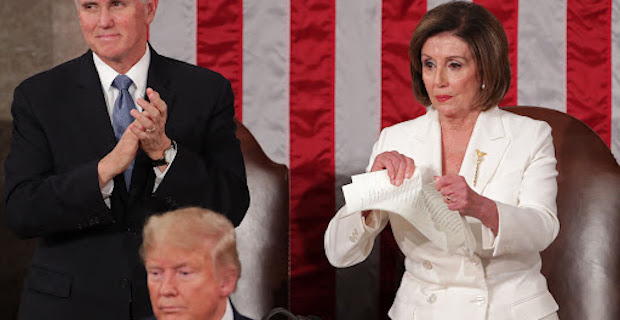 U.S. President Donald Trump made his case for re-election to America's middle class voters during Tuesday evening's State of the Union address while repeatedly laying into Democrats.  In what was already a remarkable electioneering address, Trump decided to add his own unique flourishes harkening back to his time on television.  Trump awarded conservative firebrand Rush Limbaugh with the Presidential Medal of Freedom, granted a fourth grade student a scholarship and reunited a soldier deployed to Afghanistan with his family.

The pageantry prompted Democratic Congressman Tim Ryan to leave the House of Representatives, which Trump was addressing. The Ohio congressman later said on Twitter he "had enough. It’s like watching professional wrestling. It’s all fake."

House Speaker Nancy Pelosi, the highest-ranking congressional Democrat, and the president exchanged mutual snubs with Trump issuing the first salvo by declining to shake the speaker's hand at the onset of his address. After the president concluded his remarks, Pelosi lifted up a copy of his speech, pursed her lips and tore it in half. 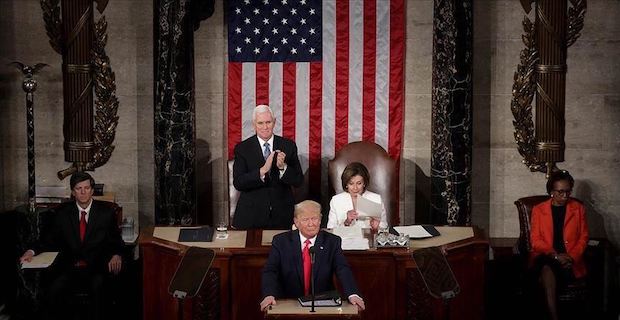 “It was the courteous thing to do considering the alternative,” Pelosi said of her decision, according to multiple reports.

Beyond the showmanship, Trump used his address to repeatedly make his case that America is better off now than it was when he entered office three years ago, boasting of a booming stock market and elevated household incomes.

"Jobs are booming, incomes are soaring, poverty is plummeting, crime is falling, confidence is surging, and our country is thriving and highly respected again!" he said to thunderous applause from Republicans and a muted Democratic chorus. "America's enemies are on the run, America's fortunes are on the rise, and America's future is blazing bright."

"In just three short years, we have shattered the mentality of American decline, and we have rejected the downsizing of America's destiny," he added.

Trump did not mention that the period of growth he inherited began under former President Barack Obama, who ushered the U.S. out of the 2008 financial crisis, the worst since the Great Depression.

Instead, Trump sought to portray Obama's administration and Democrats generally as being anti-growth and anti-jobs, despite the fact that GDP growth has been about the same on average under his administration.

Trump made particular mention of healthcare, accusing some congressional Democrats of seeking to "impose a socialist takeover of our healthcare system, wiping out the private health insurance plans of 180 million Americans."

"To those watching at home tonight, I want you to know: We will never let socialism destroy American healthcare!"

Trump did not make mention of his impeachment, which he is expected to be acquitted on during Senate votes Wednesday evening.

The House of Representatives impeached Trump on two articles -- abuse of power and obstruction of Congress -- in December. But Republicans in control of the Senate have near uniformly indicated that they will not vote to convict the president, making it all but certain that the president will not be removed from office.

"You can listen to what someone says, but to know the truth, watch what they do," she said, making particular mention of healthcare, which she said Democrats are seeking to improve while "Republicans in Washington are trying to take it away."

Trump had pledged to easily "repeal and replace" the Affordable Care Act, and while he has proven adept at dismantling several of its key components, he has not taken the additional step of passing a replacement.

Keywords:
TrumpUS President
Your comment has been forwarded to the administrator for approval.×
Warning! Will constitute a criminal offense, illegal, threatening, offensive, insulting and swearing, derogatory, defamatory, vulgar, pornographic, indecent, personality rights, damaging or similar nature in the nature of all kinds of financial content, legal, criminal and administrative responsibility for the content of the sender member / members are belong.
Related News