'The U.S.-Turkish alliance can be a powerful force for security and stability,' says US president after 4 hours of meetings 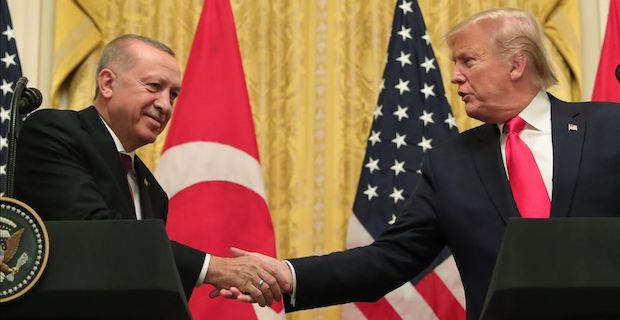 Meetings with Turkish President Recep Tayyip Erdogan and his senior officials were "very productive," U.S. President Donald Trump said Wednesday after the consultations far exceeded their scheduled conclusion. Trump said the discussions were "wonderful" during a joint press conference that took place an hour after its original start time due to the protracted conversations.

"The U.S.-Turkish alliance can be a powerful force for security and stability, not only in the Middle East, but beyond. I look forward to working with you,” Trump said, referring to Erdogan.

The U.S. president hailed Turkey as a "great NATO ally" after he and Erdogan discussed a range of topics that spanned an ongoing row over Ankara's acquisition of the Russian S-400 anti-air system, the F-35 joint strike fighter, bilateral trade and a pause in Turkey's operation in northern Syria.

Trump said he and Erdogan have directed their senior officials to "immediately work on resolving the S-400 issue.”

Turkey's acceptance of the S-400, Trump said, "creates some very serious challenges for us, and we are talking about it constantly."

"We talked about it today. We will talk about it in the future. Hopefully, we’ll be able to resolve that situation,” he said.

Erdogan, for his part, said the challenges can be overcome solely through dialogue, stressing that Ankara is committed to opening a new page with the U.S. in line with their bilateral alliance.

Turkey's acquisition of the advanced Russian air-defense system prompted the Trump administration to remove Turkey from the F-35 fifth-generation joint strike fighter program in July. The U.S. maintains that the system could be used by Russia to covertly obtain classified details on the jet and is incompatible with NATO systems.

Turkey, however, counters that the S-400 would not be integrated into NATO systems and would not pose a threat to the alliance.

Regarding the expansion of the bilateral trade volume to reach $100 billion, Trump said he thinks "we made tremendous progress on that."

“We encourage Turkey to further open its market, and they are doing that,” he said.

The White House followed up on the meeting with a lengthy statement saying Turkey "has enormous potential as a trading partner of the United States."

"The United States encourages Turkey to further open its markets to American goods and services, and ensure a level playing field for our trade relationship," the White House added.

Keywords:
ErdoğanTrump
Your comment has been forwarded to the administrator for approval.×
Warning! Will constitute a criminal offense, illegal, threatening, offensive, insulting and swearing, derogatory, defamatory, vulgar, pornographic, indecent, personality rights, damaging or similar nature in the nature of all kinds of financial content, legal, criminal and administrative responsibility for the content of the sender member / members are belong.
Related News