First ever U.S.-North Korea summit gets underway in Singapore 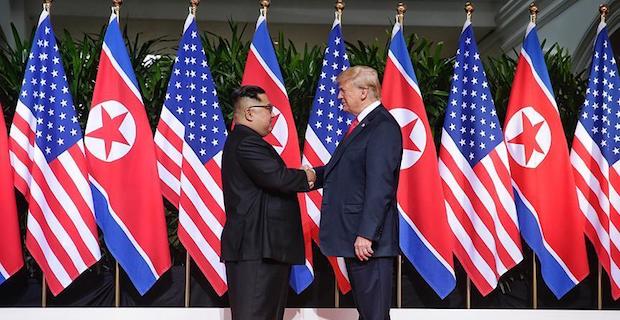 U.S. President Donald Trump and North Korean Chairman Kim Jong-un warmly greeted one another Tuesday as they kicked off their highly anticipated denuclearization talks in Singapore.

Gripping each other by the hand, the two leaders exchanged some brief words before moving on with their personal translators to begin a private meeting.

"We're going to have a great discussion, and I think tremendous success," Trump said alongside Kim, according to Yonhap News Agency. "And it's my honor, and we will have a terrific relationship, I have no doubt."

Kim replied by recognizing the challenges they had to overcome to get this far.

"There were fetters and wrong practices that at times covered our eyes and ears, but we overcame everything to come this far," he was quoted as saying in Korean.

The pair are set to meet until early afternoon, when it is hoped that they will present a joint agreement including steps for the North's abandonment of nuclear weapons.

However, many analysts are concerned that Washington and Pyongyang may not be able to agree on a definition of denuclearization while also pointing out the challenge in building the required trust to fulfill any related deal.

Keywords:
Donald TrumpNorth Korean Chairman Kim Jong-unAmerica And North Korea
Your comment has been forwarded to the administrator for approval.×
Warning! Will constitute a criminal offense, illegal, threatening, offensive, insulting and swearing, derogatory, defamatory, vulgar, pornographic, indecent, personality rights, damaging or similar nature in the nature of all kinds of financial content, legal, criminal and administrative responsibility for the content of the sender member / members are belong.
Related News