Trump not permitted 'to substitute his own policy priorities for those that Congress has enacted into law,' says GAO 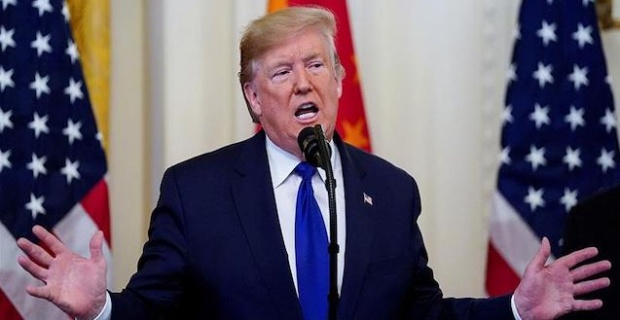 The Government Accountability Office (GAO) said in a report that the White House's Office of Management and Budget (OMB) broke the Impoundment Control Act when it delayed hundreds of millions of dollars in security assistance to Ukraine last summer amid President Donald Trump's push to get Kiev to announce criminal investigations he had sought.

The holdup was not a "programmatic delay," but was instead driven by policy in violation of the law, the office concluded.

"Faithful execution of the law does not permit the President to substitute his own policy priorities for those that Congress has enacted into law," Thomas Armstrong, the office's general counsel, said in writing office's findings. "The President is not vested with the power to ignore or amend any such duly enacted law"

The office's report comes as the Senate prepares to begin Trump's impeachment trial on charges approved by the House of Representatives that he abused the power of his office and obstructed Congress by stymying its investigation.

At issue is Trump's repeated efforts to get Ukraine to publicly announce criminal investigations into Democratic front-runner and former Vice President Joe Biden on corruption claims. The funding, which was passed by Congress, was being held up at the same time Trump was pushing for the public declaration.

Trump and his Republican allies in the House have uniformly denied the president committed any sort of wrongdoing.

"This violation of the law reflects a contempt for the Constitution and was a key part of his corrupt scheme to abuse the power of the presidency for his personal political purposes. The GAO’s independent findings reinforce the need for the Senate to obtain all relevant documents and hear from key fact witnesses in order to have a fair trial," Van Hollen, who asked the office to open the investigation in December, said in a statement.

Keywords:
TrumpUkraine Aid
Your comment has been forwarded to the administrator for approval.×
Warning! Will constitute a criminal offense, illegal, threatening, offensive, insulting and swearing, derogatory, defamatory, vulgar, pornographic, indecent, personality rights, damaging or similar nature in the nature of all kinds of financial content, legal, criminal and administrative responsibility for the content of the sender member / members are belong.
Related News