Theresa May vows to continue with her Brexit deal

Deal approved by Cabinet ‘delivers what people have voted for,’ says British Prime Minister Theresa May 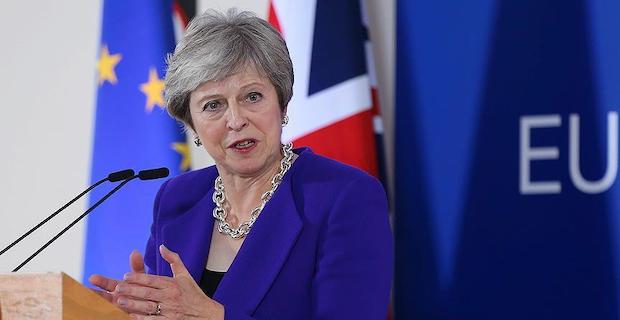 British Prime Minister Theresa May on Thursday vowed to continue with her Brexit deal.

Thanking Dominic Raab and Esther McVey, two cabinet ministers who resigned earlier, May said she was sorry to see her colleagues leaving the government.

“Serving in high office is an honor and a privilege”, but also a heavy responsibility, she said.

Underlining that negotiating Brexit has been a matter of highest consequences, she said: “it touches every area of our national life,” and her approach has been to put “national interest first.

May said the deal approved by the Cabinet on Wednesday “delivers what people have voted for”.

She said: "I believe with every fiber of my being that the course I have set out is the right one for our country and all our people.

"From the very beginning, I have known what I wanted to deliver for the British people to honour their vote in the referendum."

She said nobody can foresee consequences if they do not continue with the deal.

The British people “just want us to get on with it,” she the prime minister added.

May said she will do her job of getting the best deal on Brexit and then MPs will do their jobs when the deal is brought to the House of Commons.

She said the emergency Brexit EU summit will go ahead as planned.

Multiple ministers, including the Brexit secretary, resigned on Thursday saying they could not support Prime Minister Theresa May’s Brexit plan, which the Cabinet approved with majority vote on Wednesday.

"Today, I have resigned as Brexit Secretary," Dominic Raab said.

"I cannot in good conscience support the terms proposed for our deal with the EU. Here is my letter to the PM explaining my reasons, and my enduring respect for her," he added.

Another Cabinet minister Esther McVey followed Raab and resigned as Work and Pensions Secretary, saying she could not support the deal.

”Earlier this morning I informed the prime minister I was resigning from her Cabinet,” she said.

Letter of no confidence

Following the resignations and a statement by May in the House of Commons, Conservative MP Jacob Rees-Mogg has sent a letter of no confidence in the prime minister to the Conservative Party’s 1922 Committee.

Speaking to the media outside the parliament, Rees-Mogg said the government should go back to Brussels and tell them that the U.K. will leave without a deal, and trade on the terms of the World Trade Organization.

“Regrettably, the draft withdrawal agreement presented to parliament today has turned out to be worse than anticipated and fails to meet the promises given to the nation by the prime minister, either on her own account or on behalf of us all in the Conservative party manifesto,” he said in the letter.

“It is of considerable importance that politicians stick to their commitments or do not make such commitments in the first place,” he wrote.

He added: “Regrettably, this is not the situation, therefore, in accordance with the relevant rules and procedures of the Conservative party and the 1922 committee this is a formal letter of no confidence in the leader of the party, the Rt. Hon. Theresa May.”

A vote to end May’s leadership will need at least 48 letters in total before it can be initiated.

Under the proposed deal, the EU accepted the idea of whole-U.K. customs union with the bloc in a major concession to please U.K.'s demands to protect its territorial integrity.

A previous EU version of backstop would keep Northern Ireland anchored in the EU single market and customs union until a solution is found on the border issue in the island of Ireland.

In return, Britain is reported to have agreed that it will not be allowed to exit the backstop unless and until the EU is convinced that there is no prospect of a return to a hard border.

The EU said an emergency Brexit summit will be held on Nov. 25 in Brussels.

Keywords:
Theresa MayBrexitBrexit DealBritish Prime Minister
Your comment has been forwarded to the administrator for approval.×
Warning! Will constitute a criminal offense, illegal, threatening, offensive, insulting and swearing, derogatory, defamatory, vulgar, pornographic, indecent, personality rights, damaging or similar nature in the nature of all kinds of financial content, legal, criminal and administrative responsibility for the content of the sender member / members are belong.
Related News