Kurds, constituting the largest ethnic minority in Turkey, were oppressed by repressive policies in the post-1980 military regime. 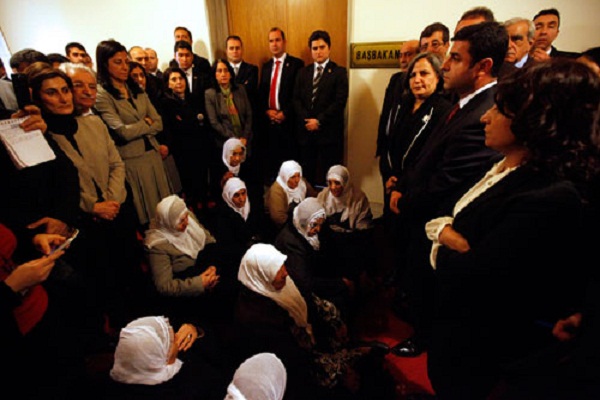 During the 1970s, there were two “nationalist front” coalition governments in Turkey. The centre right and the extreme right collaborated to oppress the rising socialist movement, the working class and labor unions, ethnic and religious minorities, and the political opposition. Revolutionary youth established resistance groups against the nationalist front, and there were significant clashes between rightist gangs and the democratic opposition. This period led to a U.S.-sponsored military coup in 1980. Many leftist political figures were imprisoned and tortured, political parties and NGOs were shut down, political leaders were banned from politics, and a military junta remained in power for three years.

Kurds, constituting the largest ethnic minority in Turkey, were oppressed by repressive policies in the post-1980 military regime. Kurdish oral traditions such as folk songs were subject to judiciary investigation and punishment. Whether politically active or not, Kurds were under the “state of emergency” administration, which lasted for many years, even after democratic elections were held again. Pro-Kurdish political parties were banned by the Constitutional Court, a 10 percent nationwide election threshold was introduced, and the Kurdish movement was excluded from parliamentary politics.

The Social Democratic Populist Party (SHP), which was established as a merger of the Party of Social Democracy (SODEP) and the Populist Party (HP), was an umbrella of the social democratic and socialist left, Kurdish and Alevi groups, and moderate political forces, all of which were against the military regime. In the 1991 elections, the SHP included important figures of the Kurdish movement among its candidates. Although these candidates were successfully elected to parliament, the Turkish nationalists and conservatives attacked SHP for its pluralistic and participatory democratic positions with regard to the Kurdish question.

1990s became an era of witch hunts against the Kurdish political movement. Newspapers published in Kurdish were banned, Kurdish T.V. channels were declared illegal by the Turkish government, and many Kurds were assassinated. The mainstream Turkish media, which was under the influence of the Turkish army and had significant Turkish nationalist motives, did not reflect the oppression of Kurds from a neutral point of view. Elected Kurdish members of parliament were stripped of their immunity and imprisoned, which was a major disaster for the democratic system in Turkey.

Turkey’s EU membership bid was an advantage for the minorities in Turkey. One of the sub-topics of the Copenhagen criteria was political which included functional democratic governance, the rule of law, human rights and the “respect for and protection of minorities”. In accordance with the EU acquis, Turkey abolished the death penalty in 2002, under the tripartite coalition government. Many of the cultural rights demanded by Kurds were accepted by parliament, with the active support of social democrats.

AKP, which came to power in 2002 as a single-party government, was the party of former political Islamists and national conservatives. The AKP leadership claimed to be “conservative democrats,” like modern European conservatives. They supported free market liberal policies, followed the economic and fiscal policies of the former government, and also adopted the EU membership bid. Since the pro-EU rhetoric of AKP required the adoption of the Copenhagen political criteria, AKP introduced a number of bills and legislative proposals that should have been supported by the social democratic opposition Republican People’s Party (CHP). However, CHP shifted to a Turkish nationalist stance under the leadership of Deniz Baykal, and ties between it and European socialists and social democrats became strained. Therefore, the AKP was perceived as the main pro-EU and centrist democratic political institution in Turkey by the international community.

During first term of AKP government, Kurds were supported against the militarist Turkish nationalist camp. The “state of emergency” rule, which was an instrument of oppression against the Kurds, was abolished in 2002. The use of Kurdish in newspapers and publications was legalized, and state TV channels broadcasting in Kurdish and other minority languages were established.

However, AKP was not in favor of the representation of pro-Kurdish parties in the Turkish parliament. The 10 percent election threshold, which was a major obstacle against the representation of pro-Kurdish parties, was actively supported by the government. AKP introduced a bill that stripped small political parties of financial support from the state, and another bill that made it difficult for independent candidates to be elected in the ballot. Pro-Kurdish parties, which had a nationwide voter support base of about 6 percent, had to stand in the elections as independent candidates to bypass the 10 percent threshold, and this new bill required all independent candidates to be on the same ballot paper with no photos or symbols. Despite these difficulties, the pro-Kurdish Democratic Society Party (DTP) and Peace and Democracy Party (BDP) became successful in the 2007 and 2011 elections, and could form groups in parliament.

AKP claimed there was a juristocratic rule in Turkey, which was conspiring coups against the government. For this reason, it wanted to introduce a constitutional amendment package that would “diversify” the composition of the High Council of Judges and Prosecutors, as well as the Constitutional Court. Diversification meant that the AKP government and AKP-majority parliament would elect some of the members of the Constitutional Court, as well as the Council of Judges and Prosecutors, which was led by the Minister of Justice and his Undersecretary. This new composition would bring the Constitutional Court and the High Council of Judges and Prosecutors under the influence of AKP. Turkish liberals, who wanted to get rid of the old constitution, supported AKP’s efforts to amend the constitution. However, social democratic CHP, which elected Kemal Kılıcdaroğlu as its new leader in 2010 before the referendum, opposed the amendment package. The package was ultimately accepted by 58 percent of the voters. The pro-Kurdish BDP, which was excluded from the preparation of this constitutional amendment, successfully boycotted the referendum in the eastern and southeastern provinces.

Following the 2010 referendum, the Turkish judiciary became dominated by pro-AKP judges and prosecutors. This new situation was a new frustration for the minorities in Turkey. Hrant Dink, a prominent socialist writer and an Armenian journalist, was assassinated in Istanbul in 2007. The subsequent trial was a litmus test for the AKP government, but AKP failed this test. Those police officers at the time of the Hrant Dink assassination, who were responsible for the police force’s overall neglect, were promoted to higher positions by the AKP government. The judicial process did not satisfy the public expectation for a fair trial. The nationalist gang that killed Hrant Dink was protected by the pro-AKP judiciary. The murderer was transferred to a juvenile court, and will be eligible for release in 2021. The court also ruled that there was no conspiracy behind the assassination, and that there was no gang involved.

The AKP government started to lose the support of Kurds and Alevis due to its increasing nationalist and Sunni Islamist discourse, starting in the 2010 referendum. AKP publicly referred to the CHP leader KõlõdaroÛlu’s ethnic and religious sect background in a negative sense. AKP supporters booed and catcalled the Alevi identity of the CHP leader. The Alevi community criticized AKP for these events, but the anti-Alevi rhetoric of AKP continued in the 2011 election campaign as well, when AKP leader Erdogan repeatedly “reminded” voters about the Alevi identity of Kılıçdaroğlu.

The Sivas Massacre Trial was another litmus test for the AKP, which resulted in a big failure, similar to that of the Hrant Dink trial. Some 33 Alevi intellectuals who had gathered in Sivas for an Alevi festival were been burned to death by Islamists on July 2, 1993. The lawyers that defended the Islamist murderers became ministers and members of the Turkish parliament for AKP. When the Sivas Massacre case was dropped in 2012 due to statute of limitations, Prime Minister ErdoÛan welcomed this situation.

The Kurdistan Communities Union (KCK) trial, which started in 2009, became another instrument of oppression against the Kurds. In it, a number of elected Kurdish politicians, NGO and labor union activists, members of parliament, mayors, journalists, university professors and students were arrested. Thousands are still in prison due to ongoing and lengthy trials. Pro-AKP judges have refused calls for the acquittal of the political prisoners.

The Uludere Massacre was the breaking point for the AKP government on the Kurdish question. In it, 34 innocent and unarmed Kurdish civilians, who were smuggling diesel fuel and cigarettes through the Turkish-Iraqi border, were bombarded in an airstrike on Dec. 28, 2011. The government rejected calls for a transparent investigation into the incident. It refused to reveal the source of intelligence that resulted in the massacre, and Prime Minister ErdoÛan congratulated the soldiers for performing their duty. Interior Minister Üdris Naim Þahin said the smugglers would have been put on trial if they had not been killed.

We can thus see that AKP, which initially claimed to be a conservative democratic party, turned out to be the focus of the Sunni – Turkish, ultranationalist, extreme right. This worrying situation can only be reversed by a democratic coalition of AKP opponents, as well as new social movements, Kurds, Alevis, leftists and liberals.

By Erkan Bayir / October 2012
Your comment has been forwarded to the administrator for approval.×
Warning! Will constitute a criminal offense, illegal, threatening, offensive, insulting and swearing, derogatory, defamatory, vulgar, pornographic, indecent, personality rights, damaging or similar nature in the nature of all kinds of financial content, legal, criminal and administrative responsibility for the content of the sender member / members are belong.
Related News