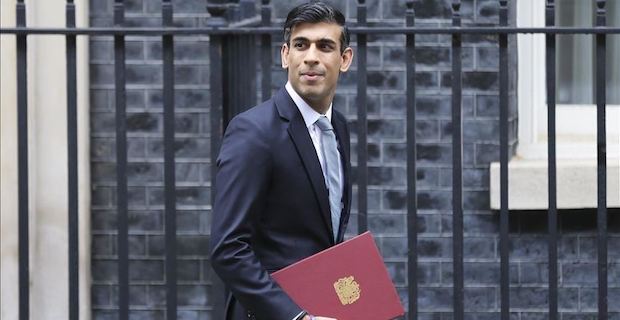 Rishi Sunak, 42, was born in Southampton to Indian parents who came to the UK from East Africa. His father was a doctor and his mother owned a chemist shop. He was educated at a private school before going to Oxford University to study philosophy, politics and economics (PPE) -- the degree of choice at the university of choice for Britain's political elite. He then earned a master's degree in business administration (MBA) from Stanford University in the US as a Fulbright Scholar. At Stanford, he met his future wife, Akshata Murty, the daughter of an Indian billionaire.

After his education, Sunak worked for Goldman Sachs before moving into hedge funds. Sunak and Murty had a combined fortune of £730 million ($875 million) as of 2022, making them the 222nd richest people in Britain according to the Sunday Times Rich List. The couple has two daughters.

Sunak entered parliament in 2015, representing Richmond constituency in North Yorkshire, northern England. He voted Leave in the 2016 Brexit referendum. His first government role came under then-Prime Minister Theresa May when he was parliamentary undersecretary of state for local government. After May resigned, he backed Boris Johnson's bid for prime minister.

The favor was duly returned, and Johnson appointed Sunak as chief secretary to the Treasury, who is second-in-command to the chancellor of the exchequer. At the time, Johnson appointed Sajid Javid as Chancellor, but Javid quickly resigned after a clash with Johnson's powerful special adviser Dominic Cummings over an issue to do with staffing.

Just weeks into his position, the COVID-19 pandemic struck the UK, turning Sunak from a hitherto unknown politician into a household name -- and a popular one at that.

He devised and implemented a wide-ranging economic support program for the country that ran into the hundreds of billions of pounds, supporting both employers and employees with generous government funding.

At daily televised press briefings, his slick and professional demeanor contrasted sharply with Johnson's more chaotic and unrestrained style. As criticism of Johnson mounted, Sunak was increasingly talked up as a potential successor. "Brand Rishi" became a catchphrase in local media in recognition of his glossy social media presence.

Sunak's poll ratings with the public were dizzyingly high. Then came partygate. This was the scandal that saw dozens of parties held during the COVID-19 pandemic in 2020 and 2021 in Downing Street and government departments exposed in the press. Johnson's poll ratings were obliterated and his position as prime minister was on the brink.
Sunak was initially unscathed, with public fury being directed at Johnson for allowing, and in some cases attending, the parties.

However, when Johnson and his wife were fined for attending Johnson's birthday party, Sunak was caught up in the incident, too -- he says he did not know there was a party and turned up for a work meeting early. Sunak, however, was also fined. His popularity was dented, but not as severely as Johnson's, on whom the public was most focused.

Then it was leaked to the press that Sunak's wife was non-domiciled for tax purposes, meaning she did not pay UK tax on overseas earnings and that he maintained a US green card even after becoming chancellor. His wife changed her tax status and Sunak had already dropped his green card by the time of the reports, but these revelations greatly damaged his polished image.

In a hat-trick of bad headlines, as the cost of living crisis began to bite in earnest, Sunak was perceived to be stingy with government support at a time when he had also pushed taxes to a 70-year high to begin paying back the COVID bills. This, combined with his and his family's personal tax affairs and residual anger over partygate, all took the shine off his polished image.

After a series of scandals involving Johnson's personal honesty and integrity put his government in permanent crisis mode, Sunak was the second minister to resign from his government, dealing Johnson his political deathblow and ultimately forcing his resignation announcement.
Sunak had fought a slick campaign for the party leadership but lost to outgoing Prime Minister Liz Truss with the votes of party members.

Following Truss' resignation after the economic turmoil her government inflicted, Sunak has renewed his leadership bit. He is one of the two candidates, along with Penny Mordaunt, after former Prime Minister Boris Johnson pulled out of the race Sunday.

If Sunak wins the leadership this time, he will become UK's first-ever ethnic-minority prime minister.

Keywords:
Rishi SunakUKLiz Truss
Your comment has been forwarded to the administrator for approval.×
Warning! Will constitute a criminal offense, illegal, threatening, offensive, insulting and swearing, derogatory, defamatory, vulgar, pornographic, indecent, personality rights, damaging or similar nature in the nature of all kinds of financial content, legal, criminal and administrative responsibility for the content of the sender member / members are belong.
Related News