OSCE Parliamentary Assembly, told parliamentarians from across the OSCE region that further efforts to strengthen trust and confidence among the states are needed. 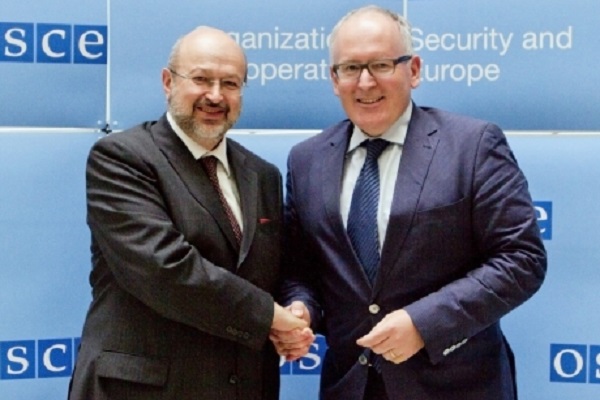 ISTANBUL, 29 June 2013 – OSCE Chairperson-in-Office, Ukrainian Foreign Minister Leonid Kozhara, speaking today at the 22nd Annual Session of the OSCE Parliamentary Assembly, told parliamentarians from across the OSCE region that further efforts to strengthen trust and confidence among the states are needed.

“It is high time to revitalize the ‘culture of engagement’ that inspired the signing of the Helsinki Final Act,” he said, referring to Helsinki+40, which is the topic of this year’s Annual Session. “The upcoming anniversary of Helsinki is a chance to find joint solutions to the common challenges we face, and to provide strategic direction to the OSCE while continuing to seek full implementation of the extensive OSCE acquis developed over decades.”

“More needs to be done to connect the OSCE to the public and civil society,” the OSCE Chair said. “The Parliamentary Assembly as the key institution linking us with our citizens can make a crucial contribution by helping us 'reconnect'."

He welcomed efforts to improve co-operation with the OSCE’s neighbouring countries, including Afghanistan and the Southern Mediterranean region, mentioning in particular  Libya's recent request to be granted the status of OSCE Partner for Co-operation.

Calling election monitoring “one of the OSCE trademarks” the OSCE Chair expressed his hope that “constructive co-operation and coherence in our activities will further strengthen the OSCE’s credibility in the sphere of election observation.”

OSCE Secretary General Lamberto Zannier, also speaking at the session, told participants that “States cannot confront transnational threats like terrorism, drug trafficking and cyber-security challenges alone” and “strengthening the security of one benefits the whole community”. He proposed that as part of the Helsinki+40 process further attention could be given to “strategic areas like conventional arms control and to strengthen our tools for promoting good governance and fighting corruption – while at the same time keeping the human dimension high on the agenda.”

The 22nd Annual Session of the OSCE Parliamentary Assembly is being held in Istanbul, Turkey from 29 June to 3 July 2013.