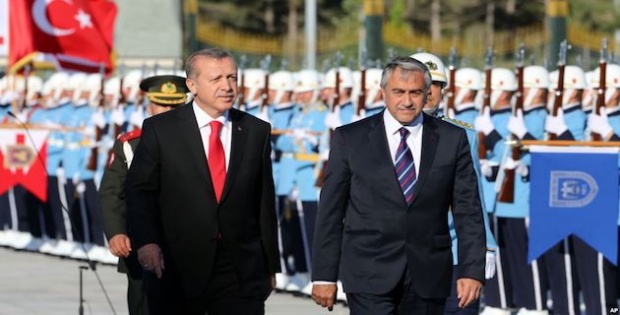 AVRUPA TIMES/LONDON-Stating that a meeting will most likely take place in the near future with the Greek Cypriot leader Nikos Anastasiades, President Mustafa Akıncı said that, “Holding a meeting in order to understand each other’s intentions does not mean the resumption of the Cyprus negotiation process. Furthermore, any new negotiation process will not be the same as the previous one.”
President Akıncı emphasized that the Turkish Cypriot side would not be part of a new prolonged and open-ended negotiation process, which could last for years without producing an outcome. However, Akıncı stated that this did not mean that the two sides would not listen to one another or establish a dialogue. “Somehow, we have to establish peaceful relations on this island. This is our responsibility to both societies, therefore we must listen to each other,” said Akıncı.
Speaking to reporters yesterday following his weekly meeting with Prime Minister Tufan Erhürman, Akıncı pointed out that during this important period in the region, the Cyprus issue is once again on the agenda, and that although the process seems stable, it is always possible for developments to move it in a positive or negative direction.
Akıncı further noted that statements or actions from the Greek Cypriot side which indicate a belief that they are the sole owners and “ruler” of the island, alongside threats to Turkey from the EU, and a view that Turkish Cypriots are a minority on the Island, would not serve to benefit the future of Cyprus.

Keywords:
Nikos AnastasiadesCyprus NegotiationPresident Mustafa AkıncıTurkish CypriotGreek CypriotTurkey EU
Your comment has been forwarded to the administrator for approval.×
Warning! Will constitute a criminal offense, illegal, threatening, offensive, insulting and swearing, derogatory, defamatory, vulgar, pornographic, indecent, personality rights, damaging or similar nature in the nature of all kinds of financial content, legal, criminal and administrative responsibility for the content of the sender member / members are belong.
Related News