Expressing his pleasure with the coordination of border crossings and the operation of all border crossings, President Ersin Tatar wished that this first step towards cooperation between the two sides would set a precedent for different areas of cooperation that are likely to be developed from now on. 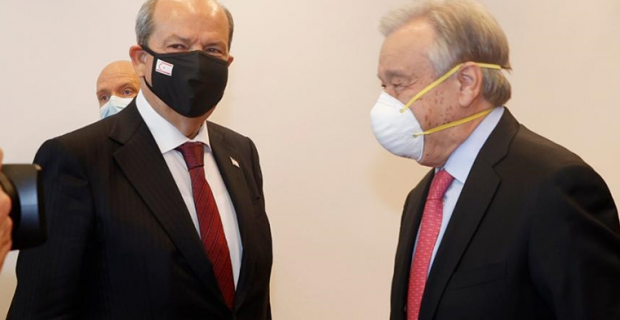 According to the statement made by Presidential Spokesperson Berna Çelik Doğruyol, President Ersin Tatar held an online meeting with the Greek Cypriot leader Anastasiades yesterday (3rd June 2021) upon the invitation of the UN Secretary-General’s Special Representative in Cyprus Elizabeth Spehar.Stating that they will continue the search for cooperation between the two sides with goodwill and a constructive attitude for the welfare and stability of the island of Cyprus and our region, Tatar said that he expects the same positive approach from his interlocutor in order to protect the interests of the two peoples living on the island.

Tatar also emphasised the importance of allowing all TRNC citizens and third-country citizens to pass through the border crossings under the right of free movement, without discrimination.

President Tatar stated that reconciliation in the Cyprus issue can be achieved with absolute respect for the principle of equality, that an important step has been taken towards cooperation between the two sides in this regard, and that cooperation in similar fields can be developed by respecting the principle of equality, and also this can help build trust between the two sides. Tatar emphasised that contacts at the level of special representatives and negotiators should continue in this direction

Keywords:
Greek CypriotPresident TatarGreek Cypriot Leader Anastasiades
Your comment has been forwarded to the administrator for approval.×
Warning! Will constitute a criminal offense, illegal, threatening, offensive, insulting and swearing, derogatory, defamatory, vulgar, pornographic, indecent, personality rights, damaging or similar nature in the nature of all kinds of financial content, legal, criminal and administrative responsibility for the content of the sender member / members are belong.
Related News