Political parties tell British Turks to 'get out and vote'

Turkish newspaper editor Vatan Oz commented that while many Turks admire Boris Johnson, Ken Livingstone will end up taking more of the community’s votes. “Our community is plagued by high levels of suicide, gang culture and anti-social behaviour. We also 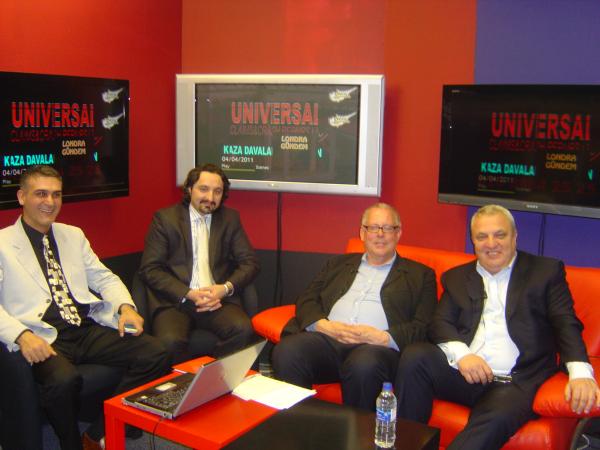 Called ‘London 2012 Elections – British Turks Decide’, this was the first time such a high profiled group of political guests had assembled to specifically appeal to British Turkish voters. Although technical problems dogged the two-hour broadcast on Kibris Genc TV, a lively debate ensued in its North London studios. During a live telephone call, Ken Livingstone said his campaign was going well, with “over one million pledges to his campaign – the best show of Labour support since the 1990s”. He said the poor state of the British economy had shaped his policies, “It’s about putting money back into the pockets of ordinary people by lowering transportation fares, restoring the Education Maintenance Allowance for young people and tackling rip off rents in London”.

When asked about his past anti-Turkish actions including banning North Cyprus adverts, Mr Livingstone responded, “I want to enjoy good relations with both sides [in Cyprus]. In London we have Turkish and Greek Cypriots who live together, let’s export this tolerance to Cyprus.” He added, “I have also visited Istanbul twice since 2008. Turkey is a major player in the world. As Mayor, I will forge closer links and continue to work closely with the dynamic British Turkish speaking community.”

Turkish newspaper editor Vatan Oz commented that while many Turks admire Boris Johnson, Ken Livingstone will end up taking more of the community’s votes. “Our community is plagued by high levels of suicide, gang culture and anti-social behaviour. We also want to feel valued as Turks and Muslims. Ken Livingstone has been the only candidate to touch on all these issues.”

John Colbert, campaigns manager for the CUW, said the election should be fought on “politics and not personalities” and criticised Boris Johnson for “looking after the interests of the elite”. He claimed “Ken Livingstone as London Mayor offers the most progressive policies that will benefit ordinary worker class people, from [transport] fare reductions to using the London Transport hub to create sustainable low-cost energy for Londoners”.

Jonathan Fryer, chairman of the London Liberal Democrats, said the party had run a higher profile campaign with better support for their Mayoral candidate Brian Paddick, who has “grown in stature in the past four years”, but conceded it is likely Boris Johnson will win. He however believes the Lib Dems will do well in the assembly. “We have an even split of male and female candidates and the likes of Shas Sheehan will ensure the diversity of London is properly represented.”

Hackney resident Andrew Boff took a contrary stance to his party leader David Cameron and London Mayor Boris Johnson singing up the importance of multi-culturalism. He said, “I’m an East End boy and know it’s our diversity that makes this city great. Many have become cynical with politics. For me it’s about engaging people where it matters. I’ve stood outside a mosque with British Muslims taking a stand against the EDL one day, in Stamford Hill the next, then meeting with Turkish community groups to discuss concerns over youth violence.”

Labour’s Murad Qureishi said, “The Turks are clearly an important community making a major contribution to London politically, culturally and economically. I look forward to working with them representing their needs and aspirations.”

Dr Shahrar Ali honed in on how many Londoners were disillusioned with the current political framework and that the Greens offered a viable political alternative. He added, “We’re instinctively internationalist in political outlook. We fight injustice and discrimination wherever it occurs. We are a friend of the Turkish community in London and are reminded of the invaluable contribution they make to life in this city.”

Liberal Democrat and South Londoner Shas Sheehan is aiming to be the first Muslim female in the Greater London Assembly, “We want the elected representatives of London to look like Londoners.  It is important for there to be an ethnic and gender balance on the assembly. We are fighting these elections on three key issues: Transport, Policing and Crime, and Housing.”

Azad Ali, a Director from the Islamic Forum of Europe, said British Muslims were bucking the trend to vote in large numbers even in areas where turnout was traditionally low. He pointed to the recent Bradford West bi-elections where 60% of the electorate voted, “British Muslims are becoming more engaged in mainstream British politics. Voting preferences tend to be shaped by interest in specific issues instead of long-term policies though, which will change as we mature as a voting community.”

The programme was sponsored by the Communication Workers Union and Turkish Cypriot human rights group Embargoed!, with both organisations keen to see British Turkish voters engaged. Boris Johnson, Brian Paddick and Jenny Jones had also been invited onto the TV show but were unable to participate due to prior commitments.

The show’s presenter Fevzi Hussein said, “The line-up for tonight’s show was incredible. It demonstrates that when we engage the political process, the parties are all willing to talk to the British Turkish community. If we want to make our voices heard and influence felt, then get out and vote on 3rd May.”