OUR ENEMY IS ANKARA, NOT THE NORTHERN CYPRIOT TURKS'

In his speech at the ceremony, Archbishop Chrysostomos said: “They say Cyprus is away from Greece. But we expect our Hellenic brothers to help us to vanquish the Turks from our lands. I hope we will not be disappointed.” 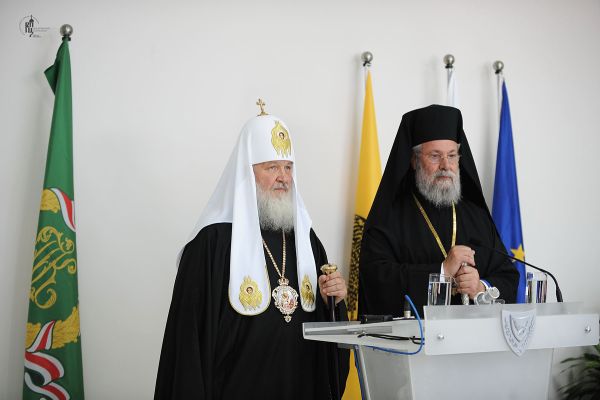 These words belong to Archbishop Chrysostomos II, the archbishop of the Church of Cyprus, taken from his interview given to the Greek newspaper Kathimerini, published on Jan. 5, 2007, and these shameful words start the very last sentence of the first paragraph. Of course this was not the first time he spoke of Turkey or Turkish Cypriots and targeted them as the eternal enemy wites our guest writer ATA ATUN from Northern cyprus.

Atun said ; "The sentence “Europe is Christian” also belongs to him. “Of course Christianity is not simply European, but in any case Europe is Christian. Europe before Christianity was just a geographical term. Its inhabitants were distinguished as those who lived within the borders of the Roman Empire or Oikoumene (lands inhabited by Greeks), and those who lived outside the borders, and were generally called ‘barbarians’,” he said."

How about his overdosed speech on the occasion of the official visit of former Greek President Kostis Stephanopoulos to Cyprus?

In his speech at the ceremony, Archbishop Chrysostomos said: “They say Cyprus is away from Greece. But we expect our Hellenic brothers to help us to vanquish the Turks from our lands. I hope we will not be disappointed.”

He claimed that “Turkey is looking for a reason to occupy the whole of Cyprus by using the federation betrayal” and warned Stephanopoulos, saying, “If Turks reach their aim in Cyprus, a few years later it will be time for the occupation of the Aegean islands.”

Archbishop Chrysostomos calls periodically upon the Greek Cypriot administration to review its stance concerning the Cyprus problem. Chrysostomos recently said that Greek Cypriot leaders should attempt to implement the UN resolutions on the island in order to bring about the withdrawal of the Turkish Army, and pointed out that the withdrawal of Turkish soldiers from the island should be a pre-condition.

Once an apostle of the notorious Greek Orthodox Archbishop Makarios, Archbishop Chrysostomos also advocates violence to achieve Greek aims for Cyprus. From time to time -- and without missing the opportunity to jolt Greek Cypriots on some occasions -- Chrysostomos persists in making statements about “fighting to the end” and “drinking the blood of Turks.”

He recently attempted to enlarge the boundaries of the Church of Cyprus to cover the northern Turkish parts of Cyprus as well.

The last session of the Holy Synod (ruling body of the Church of Cyprus) decided that the historic Monastery of the Apostle Barnabas in the northern territories would be declared Stavropegial (a monastery that falls directly under the archbishop’s authority) and determined the details of the changes, especially the boundaries, the parishes and the communities of the new Metropolitanates and Chorepiscopates.

The decision was also made to establish three Metropolitanates in the northern Turkish territories and elect the relevant Metropolitans.

The crowning ceremony of the Metropolitan Vasileos of Konstantia and Arsinoe, both in the territories of Turkish Republic of Northern Cyprus (KKTC), were also attended by the representatives of the Fener Patriarchate in İstanbul and Archbishop Christodoulos, the primate (head) of the Church of Greece.