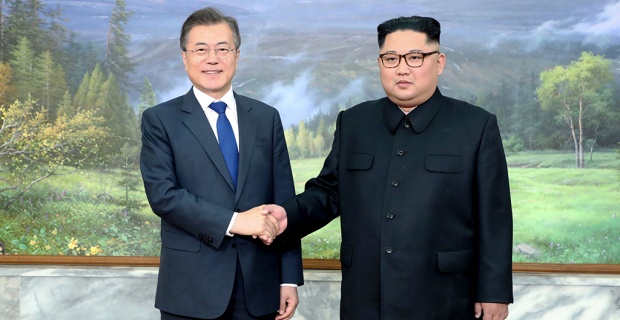 North Korean leader Kim Jong-un vowed to take specific denuclearization steps on Wednesday, as he met South Korean President Moon Jae-in on the second day of their summit in Pyongyang.

They jointly announced the outcome of their talks at a news conference.

After criticisms that the North had not agreed to a clear denuclearization plan during earlier summits with Moon and U.S. President Donald Trump, the South's leader said the Koreas have now discussed "denuclearization steps for the first time."

"The North has agreed to permanently shut down its Dongchang-ri missile engine testing facility and missile launch pad under the participation of experts from related countries," Moon said in comments carried by local news agency Yonhap.

Kim added that their agreement will improve inter-Korean ties and "bring closer the era of peace and prosperity."

In June, Trump offered a brighter economic future to North Korea and the lifting of sanctions, on the condition that Kim would verifiably denuclearize his country.

Dialogue between Washington and Pyongyang subsequently broke down over a lack of progress, and apparent reluctance on the part of the U.S. to agree to simultaneous measures such as officially ending the Korean War in advance of the North's denuclearization.

Kim again urged corresponding actions by the U.S. on Wednesday, offering to permanently shut down the North's Yongbyon nuclear facility in return.

However, Trump is expected to meet his North Korean counterpart again, with the American president taking to Twitter to describe this week's outcomes as "very exciting."

Defense Minister Song Young-moo and his North Korean counterpart No Kwang-chol signed the agreement in Pyongyang, it said.

Moon and Kim additionally agreed to a series of cooperation initiatives, including connecting roads and railways, seeking to jointly host the 2032 Olympics, and establishing a new facility for family reunions.

Keywords:
South Korean President Moon Jae-inNorth Korean Leader Kim Jong-un
Your comment has been forwarded to the administrator for approval.×
Warning! Will constitute a criminal offense, illegal, threatening, offensive, insulting and swearing, derogatory, defamatory, vulgar, pornographic, indecent, personality rights, damaging or similar nature in the nature of all kinds of financial content, legal, criminal and administrative responsibility for the content of the sender member / members are belong.
Related News