Kerry, Lavrov and Syria envoy Brahimi meet to discuss the details of the "Geneva II" talks in French capital Paris on Monday. 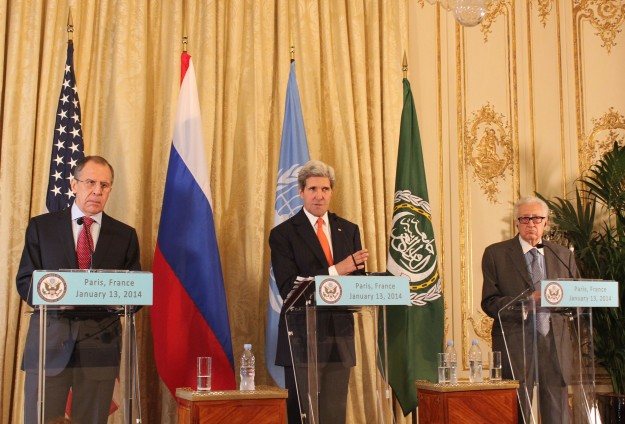 The US and Russia are discussing ceasefire areas in Syria, US Secretary of State John Kerry said Monday, as the two country remain divided on inviting Iran to the so-called "Geneva II" peace talks set for January 22 in the Swiss town of Montreux.

"We talked today about the possibility of trying to encourage a ceasefire. Maybe a localized ceasefire in Aleppo and exchange of prisoners, delivering humanitarian aid to Syria," Kerry said.

Aleppo, Syria's second city, has been a major battlefield between the regime and the opposition. Representation from opposition forces remain another key challenge in the run-up to the meeting.

Lavrov said in a press conference that Russia would like to see Saudi Arabia and Iran participate in the peace conference. He calls both 'critical countries’ in the region.

The US cites Iran’s failure to endorse a set of principles issued after the first Geneva peace conference in June 2012 -- based on a Syrian future sans Bashar al-Assad -- as reason that it should not participate.

The US accuses Iran of backing the Hezbollah, a key ally of the embattled Syrian leader.

Russian Foreign Minister Lavrov whose government backs Assad, said Damascus had indicated it might provide access for humanitarian aid to besieged areas. He specifically cited the Damascus suburb of East Ghouta, where 160,000 people have been trapped by fighting, according to the United Nations.