Israeli, Palestinian negotiators to meet for final talks in 2 weeks 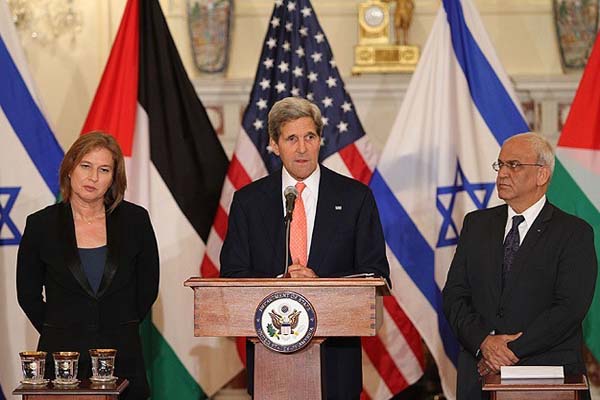 Israel was represented by the Israeli JUStice Minister and Chief Negotiator Tzipi Livni and the Advisor of Israeli Prime Minister Benjamin Netanyahu, Isaac Molcho, while Palestinian Chief Negotiator Dr. Saeb Erekat and Advisor of Palestinian President Mahmuod Abbas, Muhammed Shtayyah, represented Palestine. Following the meeting, US Secretary of State Kerry held a press conference with Livni and Erekat. Stating that it took a lot of work and a long time to reach the new moment of possibility in the pursuit of an end to the Israeli-Palestinian conflict, Kerry thanked Isreali PM Netanyahu and Palestinian President Abbas both for demonstrating courageoUS leadership and commended them for the tough choices that they made in terms of the politics at home. He denoted that they had a constructive and positive meeting, underlining that the parties have agreed to remain engaged in sUStained, continuoUS and substantive negotiations on the core issues.

"The parties will meet within the next two weeks in either Israel or the Palestinian territories in order to begin the process of formal negotiation," noted Kerry.

Kerry stated that the parties also agreed that all of the final statUS issues, the core issues, all other issues are on the table for negotiation.

He argued that the only way to end Israeli-Palestinian conflict is a practicable two-state solution.

"We all understand the goal that we're working towards: two states living side by side in peace and security. Our objective will be to achieve a final statUS agreement over the course of the next nine months," he stressed.