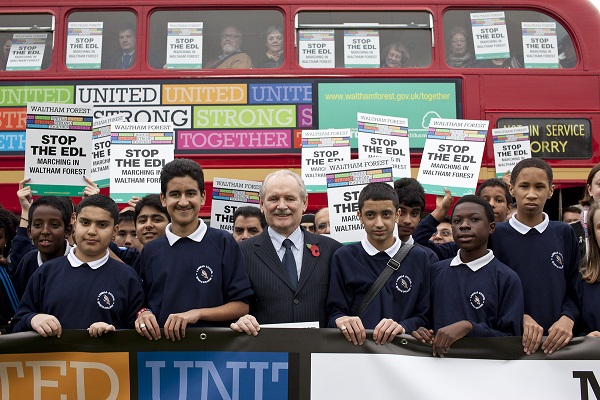 The Home Office has banned the English Defence League (EDL) from marching in Waltham Forest. The news comes just two days after a Council-led delegation delivered a petition to Parliament calling on the Government to take action to protect the borough’s residents.

"This is a victory for the ordinary residents of Waltham Forest," said Council Leader Chris Robbins.

"Thousands of people stood by us and joined our call to have the EDL - a far-right group with no ties to our borough - stopped in their tracks.

We thank the Home Office and the Metropolitan Police for listening to our residents’ concerns”.

The Council understands that the Metropolitan Police will now allow the EDL to carry out a static protest outside the House of Commons on Saturday 27 October – ensuring that the far-right group does not enter Waltham Forest.

In a joint statement Chris Robbins along with local MPs Stella Creasy, John Cryer and Iain Duncan Smith, stated: “The Police are very clear that the ban applies to any group, not just the EDL, and our primary concern is the safety of ordinary residents who have been caught up in this ongoing nightmare.

“We understand that the Metropolitan Police has told the EDL that they can only carry out a static protest outside the House of Commons on Saturday 27 October – ensuring that the far-right group does not enter Waltham Forest.

“We call on everyone who had planned to demonstrate, especially those who have no connection to this borough, to stay away and allow the community to get back to normal.”

The EDL were planning to return to Waltham Forest on Saturday 27 October following their chaotic visit to the borough in September.