Erdogan says Turkey ready to join any coalition against Syria

Erdogan reiterated on Wednesday that Turkey would take part in any international coalition against Syria, but stopped short of saying whether that would include military action. 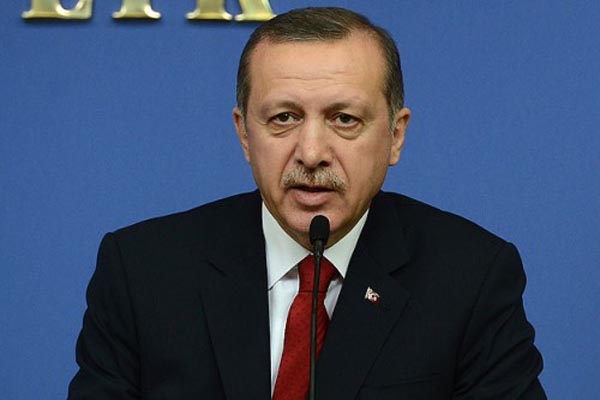 "We have said that we are ready to take part in any kind of coalition and we perceive this as a coalition of volunteers," Erdogan said without elaborating, shortly before leaving for the Group of 20 meeting in St. Petersburg. He made the following comments: "Whatever weapon you use in an attack that results in death is a crime. It is a crime against humanity. So you bomb with planes and helicopters, shoot with snipers and use tanks and it is not considered as crime but when you use chemical weapons it is considered as a crime. Is the killing once not a crime, should be the question asked. Killing is a crime." Turkish PM Erdogan said, it is interesting that Putin has changed his stance on Syria and been in favour of military intervention against Syria in case chemical weapons were used while he was against military intervention in Syria in all other cases.

Turkish PM Erdogan also said " Turkey's ambassador to Egypt had been recalled earlier to discuss Egypt crisis earlier and he is going back to Egypt now, but if anything unexpected comes up in Egypt, we will assess his recalling again."

Turkish PM Erdogan regarding upcoming Egypt visit of Turkey's main opposition party (CHP) delegation, said "there is nothing CHP could do either in Iraq or Egypt. They can only share their experiences as saying 'we made a military coup like this before, we backed such coups,'  and 'military coups mean this, civil coups mean that'."