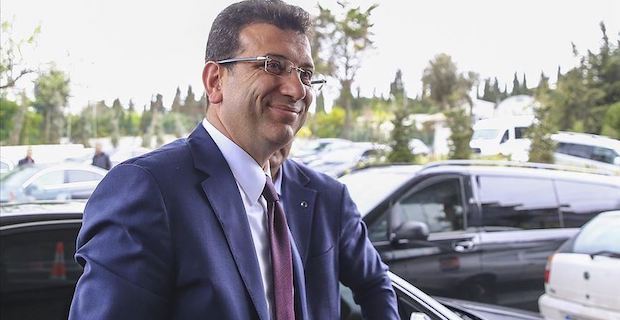 Following a number of recounts from Turkey’s local elections last month, the Istanbul mayoral candidate from the main opposition party on Wednesday received his certificate of election from electoral authorities. Ekrem Imamoglu of the Republican People's Party (CHP) was awarded the certificate of election at Caglayan Courthouse, where the Istanbul Election Council is located, to become mayor of Istanbul.  The certificate followed recounts in districts of the metropolis -- where some 15 million people live -- such as Maltepe, Buyukcekmece and Fatih.

On Monday, Binali Yildirim, the ruling Justice and Development (AK) Party Istanbul mayoral candidate, said that it was "clear" that his votes had been stolen during the March 31 elections and gone to Imamoglu.

Yildirim told reporters that it was the Supreme Election Council (YSK) that would make the final decision on Istanbul's local polls.

The regional election council that awarded Imamoglu’s certificate is part of the supreme council.

Millions of Turkish voters cast their votes nationwide on March 31 in local elections to choose the nation's mayors, city council members, mukhtars (neighborhood officials), and members of elder councils for the next five years.

Keywords:
Ekrem ImamogluIstanbul Mayor
Your comment has been forwarded to the administrator for approval.×
Warning! Will constitute a criminal offense, illegal, threatening, offensive, insulting and swearing, derogatory, defamatory, vulgar, pornographic, indecent, personality rights, damaging or similar nature in the nature of all kinds of financial content, legal, criminal and administrative responsibility for the content of the sender member / members are belong.
Related News