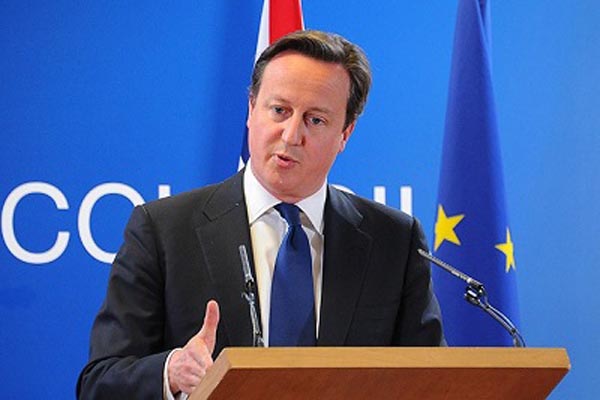 Nevertheless Cameron's Conservative party said they would try other ways to get the promise - seen as a way to help the prime minister pacify rebellious eurosceptic factions within his party - onto the statute book.

Cameron had hoped to use an unorthodox legislative channel in parliament to give legal backing to his promise to hold an in/out EU referendum in 2017 if he wins an election next year.

But on Friday members of the upper house of parliament from the opposition Labour party and junior coalition partner the Liberal Democrats effectively killed off that bill by ensuring it would not have sufficient time to pass into law.

"Today Labour and the Liberal Democrats showed their contempt for democracy and the British public," said James Wharton, the Conservative parliamentarian sponsoring the bill.

Polls show around 43 percent of the public would vote to leave Europe in a referendum, with only 33 percent in favour. That sentiment has fuelled a surge in support for the anti-EU UK Independence Party which could split the Conservative vote at the 2015 election.

Wharton said his party would make another attempt to pass the law, and if necessary try to force it through under rarely used powers to circumvent the upper house.

Labour have not ruled out holding a referendum on EU membership but say a law guaranteeing it would hurt business investment, while the Liberal Democrats say a referendum would only be needed if there was a major treaty change.

Cameron had already lowered expectations of the bill becoming law but its failure comes a day after a falling out with members of his party over Europe which dented his authority. The blow is also likely to agitate right-wing Conservatives who want assurances he will follow through on his referendum promise.

Speaking before the filibuster, Cameron used a summit with French President Francois Hollande to stress that his commitment to a referendum would not be affected if the bill did not pass.

"The in/out referendum that I will hold if I'm prime minister will happen by the end of 2017, there can be absolutely no doubt about that," Cameron told reporters at the summit.

"Whether that (referendum bill) succeeds or fails, that makes no difference to the pledge I am making."

But the summit with Hollande also exposed the tough challenge he faced to win support on the continent for a sweeping reform of the EU, including re-opening the bloc's founding treaties.

Cameron said he still believed this renegotiation could be achieved in time to present the British public with his case for staying within a reformed EU in 2017.