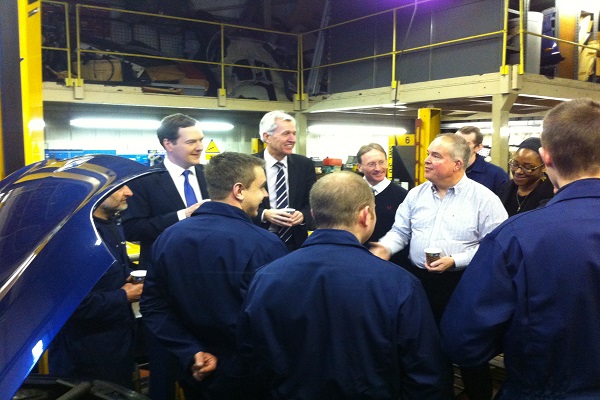 After being invited to meet the owners of Ridgeway Garages by Enfield North MP Nick de Bois, the Chancellor used the occasion to explain about the Employment Support Allowance. The allowance is available to all businesses and will cut £2000 off the total national insurance bill of every business. The Treasury says the move will save more than 1.25million companies a total of £5.5billion and 90 per cent of those benefiting are small businesses – the equivalent to £200 per employee by the end of the Parliament.

It follows an earlier announcement from the Chancellor that the Government is giving a £1,000 discount on business rates to help small businesses too.

Enfield North MP Nick de Bois said, “I know from meeting Turkish business owners in the borough that this help from the Government will help them to expand and create more jobs. Small businesses are the lifeblood of the local economy and I fully support the Government in making jobs a priority. The Labour Party wanted increased the employers National Insurance Tax when in power, it's the Conservatives that cut taxes.

Chancellor George Osborne said, “More help for small businesse fits with what Nick has been doing, which is more than almost any MP has done in the country in supporting jobs in his local constituency and hosting jobs fairs. He was the one who said that this is a great small business and the type of job creation we want to see more of.”

After being invited to meet the owners of Ridgeway Garages by Enfield North MP Nick de Bois, the Chancellor used the occasion to explain about the Employment Support Allowance.