UK slammed by US over proposed digital tax, while EU says balance of power lies in its favor 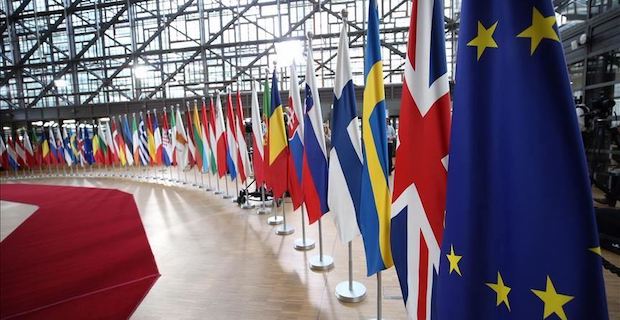 A tumultuous week has seen Britain squeezed by both the U.S. and the European Union as London embarks on simultaneous trade talks with both economic powerhouses ahead of formally leaving the EU on Jan. 31.  A proposed ‘digital tax’ on U.S. companies drew the ire of Washington, while Brussels made clear where it saw the balance of power between itself and London.

Irish Prime Minister Leo Varadkar and the EU’s chief Brexit negotiator Michel Barnier gave a joint press conference Monday.  “If we have no agreement, it will not be business as usual and the status quo. We have to face the risk of a cliff edge, in particular for trade,” Barnier warned.

Varadkar told the BBC: “The reality of the situation is that the European Union is a union of 27 member states. The U.K. is only one country. And we have a population and a market of 450 million people. The U.K., it’s about 60 million. So if these were two teams up against each other playing football, who do you think has the stronger team?”

Financial services are crucial to London economically, but fishing rights are a politically sensitive issue despite not contributing much to the British economy in comparison. London wants both, but Brussels has other ideas.

Varadkar told the BBC: “If financial services and entertainment, audiovisual, are cut off from the single market, the European market, that will be a very severe blow to the British economy and the southeast, in particular in London,” he said.

British Prime Minister Boris Johnson, through his spokesman, hit back by saying Britain would be “taking back control of our waters. We have been clear on that.”

The U.K. is negotiating with the EU and U.S. simultaneously, with local media speculating that this is an attempt to play both sides off each other to gain better deals.

The American attitude has been capricious at best thus far.

"We've said that our goal -- your goal -- is trying to get [this] trade agreement done this year, and I think from a U.S. standpoint we are prepared to dedicate a lot of resources,” U.S. Treasury Secretary Steven Mnuchin told a public audience at Chatham House, a British foreign policy think tank, over the weekend.

Having won an initial phase agreement with China, U.S. President Donald Trump is particularly keen to score another deal with the U.K. – or at least something tangibly similar considering time restraints – before U.S. presidential elections in November.

“I’m quite optimistic. I think the prime minister and the president have a very good relationship,” Mnuchin said.

He was in London to meet with his counterpart, British Chancellor Sajid Javid. His visit came amid an escalating row over a so-called ‘digital tax.’

Javid wants a 2% tax on the revenues of digital platforms such as search engines, social media platforms and online marketplaces that turn a profit in the U.K. The tax could raise £500 million ($653 million) a year by going after companies such as Google, Facebook and Amazon.

“We plan to go ahead with our digital services tax in April,” Javid told Davos last week. “It is a proportionate tax. It is a tax that is deliberately designed as a temporary tax so it will fall away once there is an international solution.”

The U.S. has vehemently opposed such unilateral moves.

“The U.S. feels very strongly that any tax that is designed specifically on digital companies is a discriminatory tax and is not appropriate,” Mnuchin said.

“International tax issues are very complicated. They take long times to look at, and if people want to just arbitrarily put taxes on our digital companies, we will consider arbitrarily putting taxes on car companies.”

France had previously announced plans to introduce a similar tax but backed off in order for the Organisation for Economic Cooperation and Development (OECD), the most influential economic think tank in the West, to have time to work out a solution.

Like the threat to tax cars made in the U.K., the U.S. had threatened retaliatory tariffs on French cheese and wine.

That the U.K. will negotiate with the U.S. and EU at the same time has not slipped past Brussels.

Barnier said London could not expect to be treated with the same “respect” by the U.S. on its own rather than as part of the EU bloc that had “500 million consumers and 22 million businesses.”

He was asked by French media if he feared a bidding war over the U.K., to which he curtly replied: “There will be no overbidding on our side.”

Keywords:
EUBrexitUKBritain
Your comment has been forwarded to the administrator for approval.×
Warning! Will constitute a criminal offense, illegal, threatening, offensive, insulting and swearing, derogatory, defamatory, vulgar, pornographic, indecent, personality rights, damaging or similar nature in the nature of all kinds of financial content, legal, criminal and administrative responsibility for the content of the sender member / members are belong.
Related News