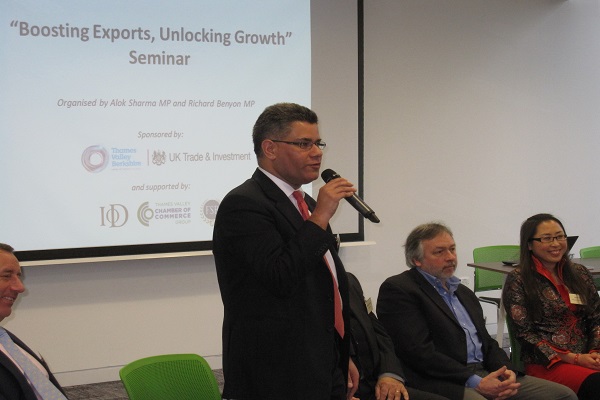 Around 100 business people from across Berkshire attended the seminar, which aimed to provide practical advice for businesses looking to start to export, or to expand their existing exports. The event was jointly sponsored by UK Trade and Investment and Thames Valley Berkshire Local Enterprise Partnership, who each gave presentations on their roles and how they can help businesses to export. The Federation of Small Businesses, the Institute of Directors and the Thames Valley Chamber of Commerce also supported the event.

Sir Tim Clark, President of Emirates Airline gave the keynote speech in which he spoke about the need to expand airport capacity to boost exports. Sir Tim spoke about the benefits of a hub airport for business, but warned of the ‘devastating’ financial costs and what would likely be a twenty year wait to deliver the infrastructure required to relocate a hub airport. By contrast, Sir Tim pointed to Dubai where work is just beginning on an $80bn new airport, which will be completed within 5-6 years, warning of the dangers for the UK of falling behind by doing nothing.

Presentations were then made by a number of small and medium sized businesses, who offered insights into some of the benefits of exporting and some of the potential pitfalls to avoid.

Olympia Tools Head of Exports, Vahe Der Kureghian began the case study presentations by talking about the need to stand out from competitors, by building up brand names for products, as well as building a company profile. He also highlighted the importance of customer service, building relationships with clients, and the need to ensure surety of payment from new business partners.

All of the presenters spoke about the need to properly prepare for exporting and getting to know the market you want to work in. Lily Yuan Li from Prospect Chinese Services explained that even the biggest companies can sometimes fail if they do not understand the market they want to enter, pointing to Tesco’s disappointing performance in China as an example. She went on to give examples of the kind of mistakes that businesses can easily make in China, with basic examples such as a company using the Google Maps service on a its company website despite the fact that the Google search engine is blocked in China.

Robert Hartshorne, Composer and Producer at ECG explained that one of the key success factors for his company in China was receiving financial assistance via Thames Valley Berkshire Local Enterprise Partnership, which would not have been possible through a standard banking relationship.

Darren Richardson, the Managing Director of ESP Global Services, advised other companies to beware of fluctuating currencies and if possible to make sure that payment is received in the same currency as costs to avoid being caught out by changes that could harm profits. He also highlighted the benefits of being able to speak a foreign language to help build relationships with new clients.

Paul Hargreaves, Managing Director of Cotswold Fayre emphasised the benefits of the British brand, which in the case of the food industry had excellent celebrity ambassadors such as Jamie Oliver, who are admired around the world, but suggested companies needed to be careful to review regulations before entering new markets, which can be highly restrictive if a foreign government is seeking to favour local companies.

Alok Sharma said: “The response from the business community to this event has been extremely positive and I was delighted by the large turnout, which is indicative of Reading’s strength as an economic powerhouse. The quality of the presentations from the business case studies was extremely high and I hope that those attending will feel inspired to go out there and get exporting!”

Alok continued: “Starting to export can be an initially daunting prospect for small and medium sized businesses, but with the right guidance it can be incredibly rewarding for the business and is an effective way of delivering sustainable economic growth. I am pleased therefore that the Government has made increasing the number of businesses that export a national priority and I will continue to do all I can to support businesses locally.”

Richard Benyon said: “UKTI supported 32,000 businesses to export in 2012-2013 and are on track to support at least 40,000 in 2013-2014. I have seen at firsthand what UKTI offer to British companies at home and abroad and I want to ensure that all those businesses in West Berkshire who want to grow have all the necessary tools at their disposal to do so.”

Richard continued: “I was delighted with the number of interested parties here today, asking key questions of important stakeholders. The Prime Minister and Chancellor have worked hard promoting British business abroad and I am proud to have played my part in championing West Berkshire.”

Jo Bryant, Managing Director of The Hands on Company said: “Thank you to Alok, the approach of the seminar was spot on for a range of businesses. It was great to get advice from other small businesses on the pitfalls of exporting, including currency issues and to learn about the support available in Berkshire. Everybody at the event was really approachable and exporting is not such a scary thing for me as a small business owner.”

Speaking after the event Lily Yuan Li, Director at Prospect Chinese Services and one of the presenters at the seminar said: “Today is very special to me as today is Chinese New Year’s Day. This year is the year of the horse, which represents prosperity and wealth, so it was great to be able to share our knowledge with so many small businesses. Gong xi fa cai (Happy New Year!)”