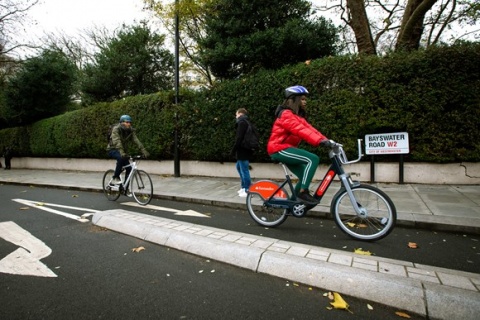 TfL’s cycle hire scheme saw more than 10,900,000 hires in 2021 as part of a wider increase in cycling in the capital.Walking and cycling continue to be vital forms of transport as the capital recovers from the pandemic.In May 2021, Santander extended their sponsorship of TfL’s flagship cycle hire scheme until 2025 and it was announced the scheme will be expanded and electrified over this timeTransport for London (TfL’s) pioneering Santander cycle hire scheme experienced a historic year in 2021 with a record-breaking number of hires across the year as well as during several different months.The cycle hire scheme continued to go from strength to strength, with 10.9 million hires taking place in 2021, surpassing the previous best target set in 2018 by 371,000 hires. More than 1 million individual customers used the cycle hire scheme last year, the first time this milestone has been reached in a calendar year, and 178,000 new members joined the scheme in 2021, a seven per cent increase on 2020 and more than double that of any year prior to 2020.During the pandemic cycling levels were boosted overall, from 21 per cent of Londoners in 2019/20 to 27 per cent in 2020/21, and participation also widened, particularly among people from minority ethnic communities. TfL research last year found that one in five people who don't cycle are now actively considering cycling, which could increase participation levels to more than 40 per cent of Londoners. Ensuring that people from all backgrounds feel comfortable cycling is vital to ensure a healthy, green and sustainable recovery from the pandemic, and the research found that half of Black and Asian non-cyclists (49 per cent and 46 per cent respectively) are open to starting to cycle.

Office workers returning after the summer holidays helped contribute to the record year, with September and October both seeing more than one million hires over the month. In September, TfL saw the highest volume of Santander Cycles commuter hires since March 2020, with an average 7,573 daily hires made between 07:00 and 10:00 on weekdays.

Santander Cycles can be hired from £2 a day for an unlimited number of 30-minute journeys. The scheme reached 10 million hires via the Santander Cycles app in September 2021, with 2.8 million hires in total taking place through the app in 2021, another new record and a 20 per cent increase on 2020. The free app is available on Apple and Android App Stores by searching for Santander Cycles. Using the app lets customers skip past the terminal and get release codes sent directly to their phone, so they can hire their cycle more quickly and easily.

Santander Cycles continue to support NHS staff and key workers by offering free cycle hire access codes, with more than 64,000 free 24-hour access periods given out to NHS and keyworkers in 2021.

A thriving cycle hire scheme is essential to the Mayor's plans to make walking and cycling easier, alongside safe cycleways and safer streets for pedestrians and cyclists. TfL continues to work closely with local boroughs to create space for cycling across the city. This includes building a strategic network for cycling in London, transforming town centres and reducing traffic on residential streets. This work is reliant on continued funding, meaning a long-term sustainable funding deal from the Government for TfL is vital.

Keywords:
Walking And CyclingPandemicTfLs Cycle HireCycling In London
Your comment has been forwarded to the administrator for approval.×
Warning! Will constitute a criminal offense, illegal, threatening, offensive, insulting and swearing, derogatory, defamatory, vulgar, pornographic, indecent, personality rights, damaging or similar nature in the nature of all kinds of financial content, legal, criminal and administrative responsibility for the content of the sender member / members are belong.
Related News