Turkey expects the U.S. to rethink its position on Fetullah Gulen after witnessing the participation of millions of people at pro-democracy rallies, 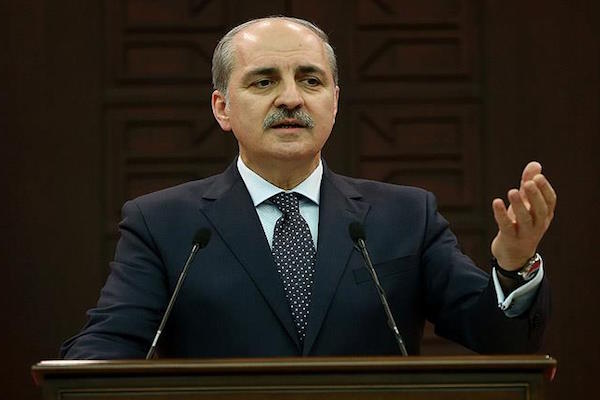 ANKARA (AVRUPA TIMES)-Turkey expects the U.S. to rethink its position on Fetullah Gulen after witnessing the participation of millions of people at pro-democracy rallies, Deputy Prime Minister Numan Kurtulmus said in Ankara on Monday.

Speaking at a press conference in the parliament following a Cabinet meeting, Kurtulmus said: “I think the U.S. officials will now hesitate in hiding, providing protection and guarding Gulen there [in the U.S.] after witnessing this rally.

"We have no doubt the U.S. administrators will revise their position on this person in Pennsylvania after [Turkish] people clearly revealed their views [about Gulen] at rallies [across Turkey]…According to security figures, around 25 million people attended the 'democracy watch' rallies across the country so far."

Turkish government has accused the U.S.-based preacher of being the mastermind of the July 15 coup bid that left 240 martyred and nearly 2,200 injured.

Gulen is being sought by an Istanbul court to face charges, and Turkey has made an official request to Washington for his extradition.

Upon a question that some members of the military allegedly linked to the Fetullah Terrorist Organization (FETO) fled to the PKK’s base in northern Iraq, Kurtulmus said a total of 216 fugitive military personnel including, 9 generals and 30 gendarme officers were still at large.

Without providing information about the fugitives' whereabouts, Kurtulmus said “speculations on where they are hiding are not confirmed by the government.”

In addition, he said ten foreigners are accused of having links to the FETO organization. "Four of them were remanded into custody," said the deputy prime minister.

To alleviate the concerns on the future of Turkey’s economy over the coup bid, Kurtulmus said a bill to ensure businessmen’s movable property is underway.

“Turkey economy was not affected by [the] coup bid and [its] aftermath,” he said.

The deputy premier also said the ban on annual leaves of public employees declared amid the three-month state of emergency in the country had been now lifted.

Turkey's government has repeatedly said the coup attempt was organized by followers of Gulen, who has lived in self-imposed exile in the U.S. state of Pennsylvania since 1999, and the FETO terror group.