More days of strikes by ambulance workers in England, Wales and Northern Ireland have been announced by the Unite union. 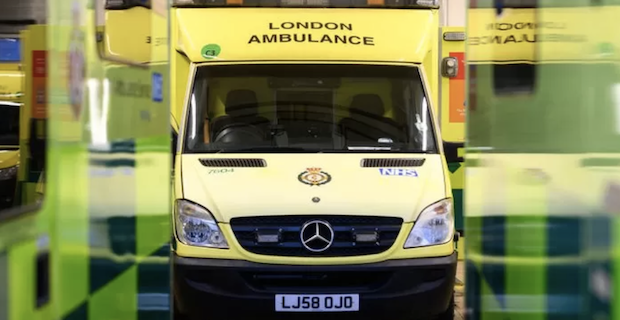 Unite the union announced six new strikes for ambulance workers over the next two months.More days of strikes by ambulance workers in England, Wales and Northern Ireland have been announced by the Unite union.Four of the dates in February and March coincide with walkouts by staff from the GMB union, in a pay dispute.On 6 February the two unions will be joined by nurses from the GMB in the biggest NHS walkout in this dispute.A health department spokesman said it is "continuing to have constructive discussions" with unions about pay.

The announcement of the news dates means ambulance trust workers will now be striking on: 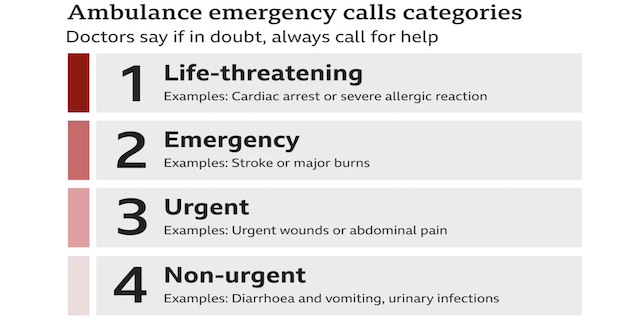 Teachers in Angus and East Dunbartonshire are on strike 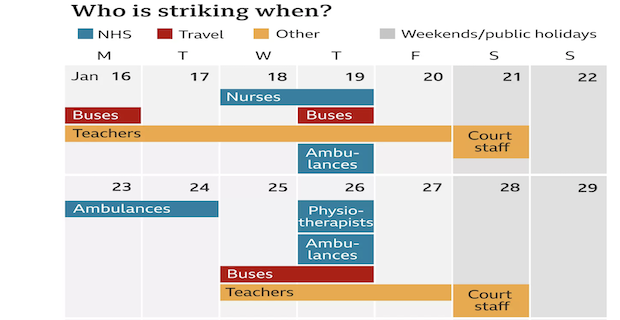 Ahead of previous strikes in January and December, patients were told that all Category 1 calls - classed as the most life-threatening situations, such as cardiac arrest - would be responded to by an ambulance.

However, less urgent calls which are not immediately judged to be life-threatening (Category 2), might have to wait longer than usual for an ambulance but they would still respond to strokes and heart attacks. Urgent problems that fit into Category 3 - such as a woman in late-stage labour - would not be prioritised, the public was told.
In all cases, patients with the most urgent clinical need will be given priority.

Unite is the smallest of the three main unions in the ambulance service, meaning on some days only a couple of hundred ambulance workers across the country will actually be striking across the 10 ambulance services in England, those in Wales and Northern Ireland.
Speaking to the BBC in the Political Thinking podcast, Unite General Secretary Sharon Graham said staff were "fighting for the NHS".
Ms Graham said: "People are dying as we speak because of waiting times and the clogging up of the NHS."

Ambulance staff and nurses to strike on same day

"If they don't solve the pay crisis, they can't solve the crisis of the workforce, which means that the NHS is on its knees," she said.
Ms Graham said workers will ensure "proper minimum cover because that is something that's really important to us".
"Nobody wants lives to be lost," she added.

The dispute centres on pay, with workers calling for above-inflation (10.5% in the year to December) pay rises.The government has made it clear it is not willing to move on this year's pay award.But the governments in England and Wales have given NHS staff an average of 4.75%, with everyone guaranteed at least £1,400 - as recommended by the independent NHS Pay Review Body.That is less than half the rate of inflation, although latest figures show the rate at which prices are rising has started to slow.One option being explored by Health Secretary Steve Barclay is backdating the 2023-24 rise to January. It would normally kick in in April.The Treasury has not agreed to the idea.This has already been tabled in Scotland, leading to NHS strikes being halted for further negotiations - although staff there received a 7.5% pay rise this year.A Department of Health and Social Care spokesperson said: "It is disappointing some union members are going ahead with further strikes at a time when the NHS is already under huge pressure from Covid, flu and tackling the backlog."The Health and Social Care Secretary is continuing to have constructive discussions with unions about the 2023/24 pay review process and what is affordable and fair."Calendar showing who is striking and when between 16 January and 5 February

Keywords:
Strikes By Ambulance WorkersAmbulance WorkersEnglandWalesNorthern IrelandUnite Union.New Strikes For Ambulance
Your comment has been forwarded to the administrator for approval.×
Warning! Will constitute a criminal offense, illegal, threatening, offensive, insulting and swearing, derogatory, defamatory, vulgar, pornographic, indecent, personality rights, damaging or similar nature in the nature of all kinds of financial content, legal, criminal and administrative responsibility for the content of the sender member / members are belong.
Related News