Media reports say victims could have frozen to death 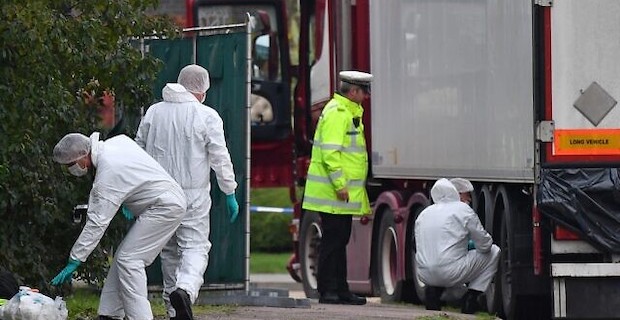 A total of 39 people who were found dead in a truck in Essex, England were Chinese nationals, British police confirmed on Thursday. “38 [of the victims] are believed to be adults, and one is a young adult woman. We previously reported that she may have been a teenager. We have since confirmed that eight of the deceased are women and 31 are men and all are believed to be Chinese nationals,” a statement from Essex police force said. Local media reports also claimed earlier that the victims were Chinese.

British police said the bodies of 39 people were found in a truck in an industrial park in Thurrock, west England on Wednesday.

A new statement from police said the tractor unit of the lorry had entered the U.K. via Holyhead on Sunday, having travelled over from Dublin.

It said: “The lorry then collected the trailer, which had travelled from Zeebrugge, [Belgium] at the port of Purfleet [UK] at around 12.30 a.m. on 23 October. The cab and trailer left the port shortly after 1.05 a.m.”

“We were called to Waterglade Industrial Park in Eastern Avenue shortly before 1.40 a.m. on Wednesday 23 October by our colleagues in the East of England Ambulance Service to reports that 39 people had been found dead in the trailer of a lorry.”

Police said they launched a murder investigation into the incident.

A 25-year-old Northern Irish driver has been arrested for suspicion of murder shortly after the discovery and “remains in custody.”

The truck is registered in Bulgaria, but it has not been in the country since 2017 and registered with a Northern Irish citizen, according to local authorities.

The Belgian federal prosecutor has opened an inquiry into the death of the 39 people on Thursday.

“This investigation will be carried out in close cooperation with the British police and judicial authorities,” the prosecutor said in a statement.

Belgian investigators said it was not yet clear when the victims were placed in the container and whether that happened in Belgium.

Local media reports suggested migrants in the refrigerator unit could have frozen to death during the journey at temperatures as low as -25 degrees Celsius.

"Each of the 39 people must undergo a full coroner’s process to establish a cause of death before we move on to attempting to identify each individual within the trailer. This will be a substantial operation and, at this stage, we cannot estimate how long these procedures will take," the police statement added.

In 2000, 58 Chinese migrants were found dead in a truck container in a similar incident in Dover, England. A Dutch truck driver was jailed for manslaughter in 2001.

Keywords:
UK Police39 Truck Death Victims
Your comment has been forwarded to the administrator for approval.×
Warning! Will constitute a criminal offense, illegal, threatening, offensive, insulting and swearing, derogatory, defamatory, vulgar, pornographic, indecent, personality rights, damaging or similar nature in the nature of all kinds of financial content, legal, criminal and administrative responsibility for the content of the sender member / members are belong.
Related News