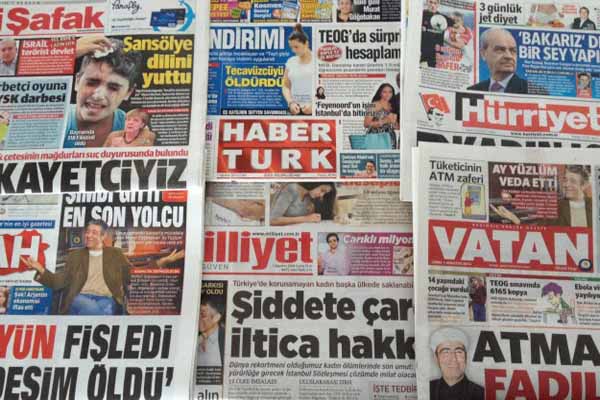 Today’s newspapers cover Turkey’s ruling AK party’s congress to elect a new party chairman. HURRIYET runs the headline: “Erdogan’s farewell congress,” at which Turkey’s foreign minister Ahmet Davutoglu is the only nominee for the AK Party chairmanship. The newspaper reports that around 40,000 AK Party members will attend the congress which will be followed by around 900 journalists. The front page of today’s STAR reads: “New Turkey era begins.” The newspaper said that Turkey’s first directly elected president, Recep Tayyip Erdogan, will address AK Party members as party chairman for the last time in the Turkish capital, Ankara. MILLIYET reported that around 70 countries would be represented at the congress. According to the newspaper, Erdogan, the AK Party’s 11-year chairman, will mainly focus on a ‘new Turkey’ message. Turkish dailies today are also covering stories on thousands of Turks who hoped to form the world’s largest portrait of Mustafa Kemal Ataturk, the founder of Republic of Turkey. POSTA headlined “Love record,” reporting that around 6,000 volunteers gathered outside the Anitkabir Mausoleum in Ankara to mark Turkey’s Victory Day on August 30. HABERTURK reported that the event would set a Guinness World Record as the largest Ataturk portrait of the world.