The 100 000th tree has been planted at Enfield Chase

The 100,000th  tree has been planted at Enfield Chase, marking a significant milestone in Enfield Council’s project to create London’s largest, new woodland 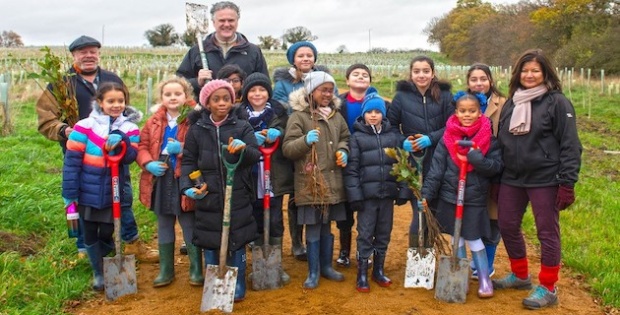 The publicly accessible, sustainable Enfield Chase Woodland Restoration Project was designed and created by Enfield Council and has been delivered in partnership with waterways charity Thames21 alongside hundreds of volunteers from all across the borough and beyond.Enfield Council’s Deputy Leader, Cllr Ian Barnes, said: “The woodland is part of Enfield Council’s endeavours to rewild parts of the borough and plant trees to offset harmful carbon dioxide, manage risks to homes through natural flood management systems and improve local biodiversity. This has been an incredibly emotional journey for everyone involved, working through a pandemic and terrible weather to meet the deadline of planting 100,000 before the onset of spring. In years to come we will have a beautiful woodland composed of native trees such as wild cherry, aspen and beech trees, easily accessible via fantastic new walking and cycling paths, and I would like us to keep planting! We want to plant a million new trees across our borough to create London’s newest forest."

Thames21 Woodland Creation Officer Nik Cain said: “Over the course of 45 community events over 800 volunteers have given their time to make this project a reality, many of them returning again and again. Thames21 is extremely proud that so many people have made such a contribution, often travelling big distances to stagger around muddy fields and plant such a huge number of trees.”

This massive tree planting programme was made possible with £748,000 of funding from the Mayor of London, with further contributions from the Council and the Forestry Commission. The Deputy Mayor for Environment and Energy, Shirley Rodrigues said:
“This new woodland is an incredible achievement and the result of two years’ hard work by dedicated community volunteers, Thames21 and Enfield Council, with support from the Mayor of London. It’s exactly the type of bold action we want to see across London to improve biodiversity, reduce flooding and ensure all Londoners have access to nature on their doorstep.

"This project at Enfield Chase is one of two new woodlands the Mayor has supported in London’s Green Belt, resulting in around 130,000 new trees and 84 hectares of new publicly accessible green space. Investment in trees and woodlands is also a key part of our Green New Deal, creating jobs and training opportunities which help tackle the climate and ecological emergencies.”As part of Enfield Council’s Climate Action commitments, there is a target to plant more than 300 hectares of publicly accessible woodland in the north and west of the borough, capturing more than 1,000 tonnes of carbon dioxide (per hectare) per annum.

In addition Enfield Council has committed £500,000 to plant 1,000 new street trees in 2022-23, a 50 per cent increase of trees on the year before. The Council will also seek funding from other sources such as the Urban Tree Challenge Fund and England Woodland Creation Offer. The aim is for Enfield to become London’s greenest borough over the next ten years. Residents can get involved by proposing areas where they would like to see more trees planted at Let’s Talk Enfield.The woodland project will still need ongoing maintenance and monitoring going forward. There are many opportunities to get involved. The Friends of Enfield Chase will be looking for more volunteers to help and an officer has been appointed by Enfield Council to manage the woodland going forward. They can be contacted via the Friends of Enfield Chase Facebook page. - Ends

Keywords:
Enfield ChaseEnfield CouncilNew Woodland.Londons LargestNew Woodland
Your comment has been forwarded to the administrator for approval.×
Warning! Will constitute a criminal offense, illegal, threatening, offensive, insulting and swearing, derogatory, defamatory, vulgar, pornographic, indecent, personality rights, damaging or similar nature in the nature of all kinds of financial content, legal, criminal and administrative responsibility for the content of the sender member / members are belong.
Related News