Man arrested 'on suspicion of terrorism,' say British police, after 2 people hit outside parliament, one still in hospital 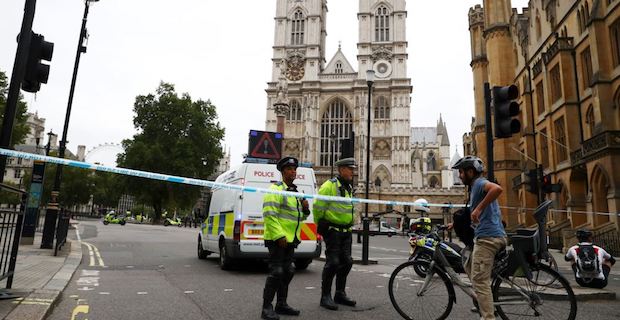 A man has been arrested “on suspicion of terrorism” after a car crashed into security barriers outside the Houses of Parliament, British police said.Armed police rushed into the scene just after the incident took place, shortly after 7:30 Tuesday morning, said Neil Basu, the assistant commissioner for counter-terrorism.Basu said a silver vehicle crashed into protective barriers after colliding with some pedestrians and cyclists.“Two people have been taken to hospital,” Basu said, briefing reporters in front of Scotland Yard.One of the injured has already been discharged but the second is still in hospital, receiving treatment, according to Basu.“We are treating it as a terrorist incident,” he added.The arrested man is not cooperating and has yet to be formally identified, said Basu.

Basu underlined that there is no intelligence at the moment on further attacks in the U.K. but appealed for any information or footage related to this morning’s incident.

“My thoughts are with those injured in the incident in Westminster and my thanks to the emergency services for their immediate and courageous response,” Prime Minister Theresa May tweeted.

The government said it will hold a high-level security meeting (COBRA) on Tuesday afternoon.

Meanwhile, British Transport Police said they are “stepping up our patrols in England, Scotland, and Wales.”

The security barriers have been in place as part of enforced security around the parliament building after a terror attack last year which killed five people and injured up to 50 others.

A terrorist killed four people on Westminster Bridge in March 2017 when he mowed pedestrians down, before stabbing a police officer who was on duty in front of parliament.

Keywords:
ParliamentTerrorism
Your comment has been forwarded to the administrator for approval.×
Warning! Will constitute a criminal offense, illegal, threatening, offensive, insulting and swearing, derogatory, defamatory, vulgar, pornographic, indecent, personality rights, damaging or similar nature in the nature of all kinds of financial content, legal, criminal and administrative responsibility for the content of the sender member / members are belong.
Related News