William 'knocked me to the floor' during confrontation in London, says Harry in new memoir due in bookstores worldwide next week 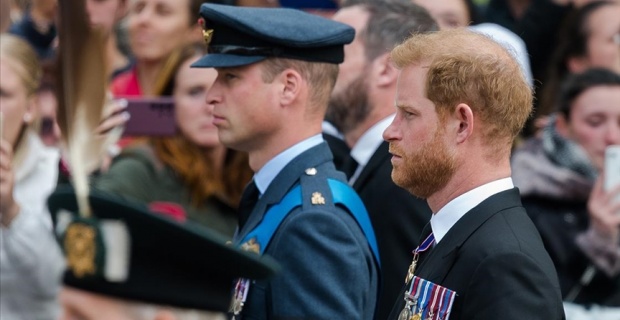 A new memoir by the UK's Prince Harry reportedly describes a physical fight he had with his brother Prince William that left Harry injured. William "knocked me to the floor," during a confrontation in London in 2019, wrote Harry in his new autobiography Spare, according to an excerpt published in The Guardian. In his book, due out worldwide next week, Harry claimed a physical attack by his brother, William, as their relationship suffered over Harry's marriage to US actor Meghan Markle.

After their wedding at Windsor Castle in 2018, Harry and Meghan quickly drifted apart from the family and moved to Canada and then California. They stepped down from official palace duties in January 2020 and moved to the US.

On US television last year, the couple complained of racism towards Markle in Buckingham Palace.

They alleged that at least one senior family member questioned the skin color of the couple’s then-unborn baby Archie and that Meghan faced huge emotional pressure in the palace.

The couple was last seen in London in September for the funeral of Queen Elizabeth, Harry’s grandmother.

In the book, set to be published worldwide next week, Harry said that the confrontation resulted in an injury to his back, according to The Guardian, which obtained a copy of the memoir.

The name of the book, Spare, comes from a traditional usage among royal families as the first son is the heir and the second is a “spare” in case anything happens to the first-born.

William “set down the water, called me another name, then came at me," wrote Harry. “It all happened so fast. So very fast.

“He grabbed me by the collar, ripping my necklace, and he knocked me to the floor. I landed on the dog’s bowl, which cracked under my back, the pieces cutting into me. I lay there for a moment, dazed, then got to my feet and told him to get out.”

Harry also said that his brother urged him to hit back, like the fights they had as children, but Harry says he refused.

Keywords:
UKPrince HarryPrince William
Your comment has been forwarded to the administrator for approval.×
Warning! Will constitute a criminal offense, illegal, threatening, offensive, insulting and swearing, derogatory, defamatory, vulgar, pornographic, indecent, personality rights, damaging or similar nature in the nature of all kinds of financial content, legal, criminal and administrative responsibility for the content of the sender member / members are belong.
Related News